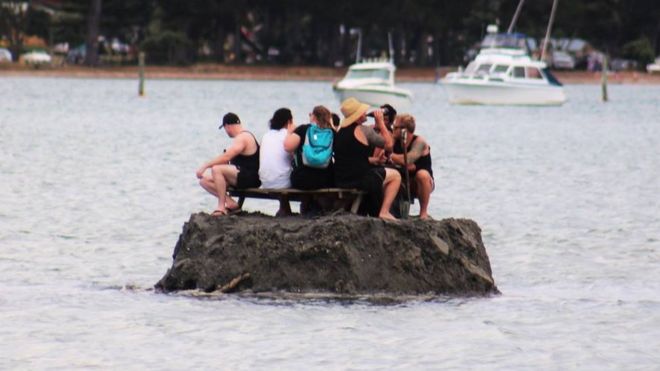 A group of New Zealanders has constructed a sand island in coastal waters, seemingly in a creative attempt to avoid a ban on drinking in public places.

The group built the structure at low tide in the Tairua estuary on the Coromandel peninsula on Sunday afternoon, reports said.

They then installed a picnic table and ice box for drinks.

Locals joked that they were in “international waters” and thus exempt from an official liquor ban.

The group drank into the night on New Year’s Eve, watching the fireworks, reported New Zealand website stuff.co.nz – and the construction was still intact on Monday morning.

A ban on public drinking is in force in Coromandel over the New Year period and those violating the ban face a fine of $250 (£130; US$180) or arrest.

But authorities seemed to be taking the initiative in light-hearted spirit.

“That’s creative thinking – if I had known [about it] I probably would have joined them,” said local police commander Inspector John Kelly when told about the sand island.

The images were posted in a local Facebook group, Tairua ChitChat, by David Saunders.

Mr Saunders told the BBC: “It was great to see some Kiwis having a bit of fun.”

But a well-known community organiser Noddy Watts said the ban was not working and was simply resulting in swathes of arrests.

He said the police were “dealing with drunk teens”.

“That’s not what they are there for. That’s what parents are there for,” he said, according to the New Zealand Herald.

“The police and St John were getting frustrated with the result and said it has to change,” said Mr Watts according to the New Zealand Herald.