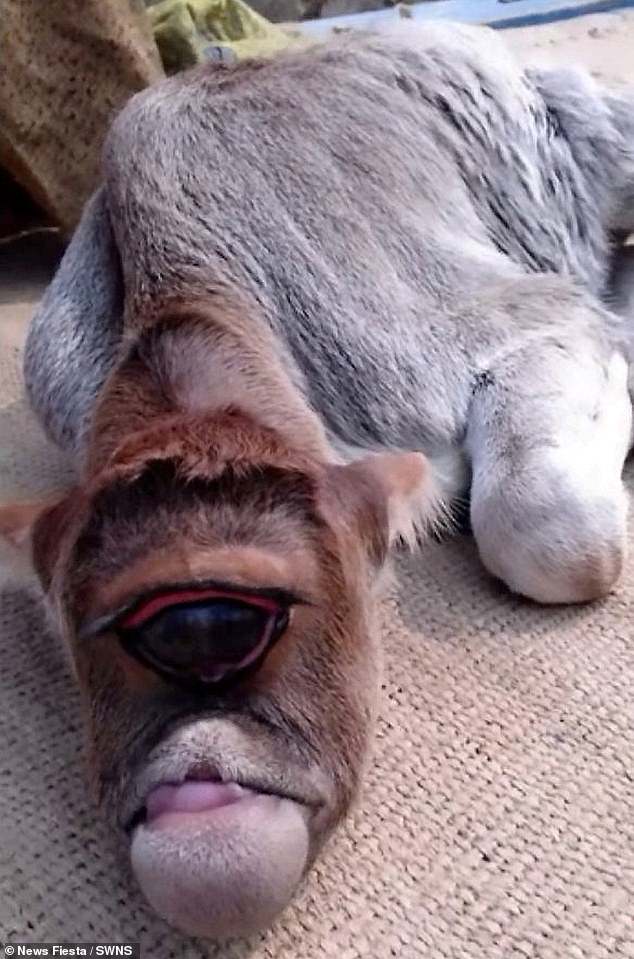 A newborn calf with just one eye is being worshipped as a god in eastern India.

The little cow, whose appearance is due to a birth defect, was born in the Bardhaman district of West Bengal.

In video footage shared online, the one-eyed calf, which also does not have a muzzle, can be seen sticking out its tongue and gasping for breath.

The owner said: ‘Ever since it was born, people have crowded my place to see the bizarre calf.

‘They are now considering it to be a miracle of God and have started worshipping it.’
The calf has cyclopia, a rare congenital disorder that occurs in both humans and animals.

It develops in the womb when the left and right hemispheres of the brain do not separate as they are meant to early on in pregnancy.

This leads to the formation of a single central cavity with one eye, or sometimes partially fused or separate eyeballs and often the complete absence of eyelashes and eyelids are absent.

The nose is also deformed, as in this calf, with an underdeveloped upper jaw.

A creature with cyclopia may be able to distinguish light and dark but will not have proper vision because the retina won’t form properly.

Creatures with the condition are normally stillborn or die shortly after due to breathing and brain problems.

Just like in Macedonia, US State Department gave Soros $9m in Albania

US Election Fraud: 280,000 ballots went missing after transport from NY to PA