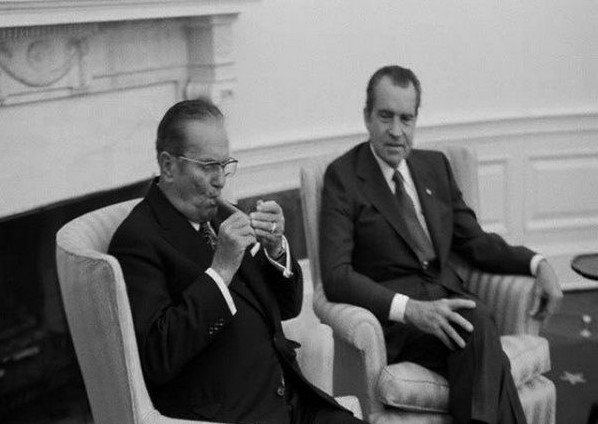 The President of the Socialist Federal Republic of Yugoslavia, Josip Broz Tito, was a guest of the US in 1971, greeted there with the highest honors.

During a meeting with Nixon, in a room full of journalists and photo reporters, Tito lighted a Cuban cigar! The move was provocative for two reasons. First, smoking in the White House was strictly forbidden since 1946. Secondly, the meeting took place at the peak of the intolerance of America and Cuba, and Tito, as you would imagine received his cigars directly by his personal friend and Cuban leader Fidel Castro.

Nixon had to react.

“Mr President, we do not smoke here in the White House”, said astonished Nixon.

Tito looked at him, continued to smoke, laughed and said coldly:

Nixon remained silent while Tito continued smoking during the entirety of the meeting.

Tito is the only individual to have broken the White House “No Smoking” rule.