An Australian hiker who was injured in a 6m (20ft) fall down a waterfall says he had to “carry” his broken leg while crawling for two days to be rescued.

Neil Parker, 54, was bushwalking alone near Brisbane on Sunday when he slipped, leaving his wrist broken and lower leg “clean snapped in half”. 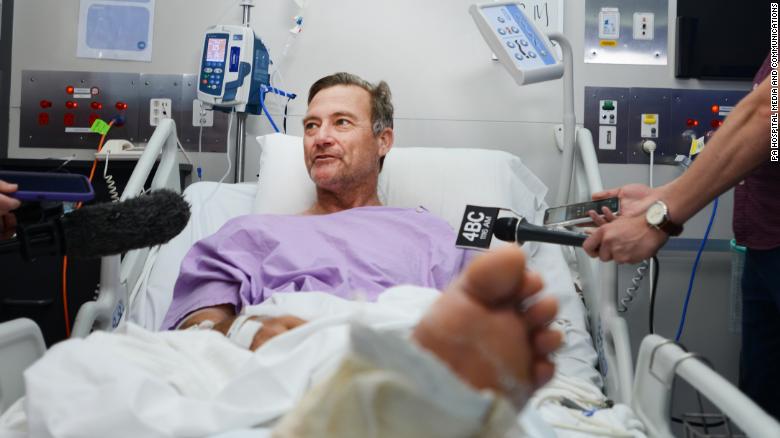 After losing his phone in the process, he decided his best chance of being rescued was to crawl to a clearing.

He made it there and was spotted – but only after an agonisingly slow journey.

“I’d get about a metre, a metre-and-a-half, each time before I had to stop and take a break,” he told reporters from his hospital bed on Wednesday.

“I just couldn’t believe it. It’s only 3km [2 miles] but [it took] two days to cover 3km. I was thinking that I was never going to get there.”

Devising a ‘self-rescue’
Mr Parker had been planning a three-hour hike at Mount Nebo when rocks gave way beneath his feet and he tumbled down the waterfall.

“I slid about 20 feet, cartwheeled and slammed into the rock and then landed in the creek on the bottom,” he said.

“And I thought, ‘the only way to get rescued is self-rescue.'”
An experienced bushwalker, Mr Parker had packed first aid supplies including bandages which he combined with hiking sticks to splint his leg.

He also had painkillers and access to water, but only limited food: nuts, sweets and an energy bar.

Mr Parker said he was “scrambling and lifting, inch-by-inch” to get to the clearing, hampered by the injuries on opposite sides of his body.

“I had to carry my leg – and legs are very heavy when they’re not connected to anything – and [I was] trying to pick it up and get over rock and then use this elbow and this arm and just constantly struggling,” he said.

He said thinking of his family gave him the mental strength to keep going, saying: “I wanted to be around for my kids.”

Moscow fed up with Yanks in Syria, jam their electronics

Why Macedonian Referendum must be boycotted by all