They say that black cats bring bad luck, but when Nick Pilfold heard about one lurking around central Kenya, he knew he was onto something special.

The Kenya-based biologist and his team deployed a set of camera traps throughout the bushlands of Loisaba Conservancy in early 2018. It wasn’t long before he got what he was looking for: undeniable proof of a super-rare melanistic leopard. 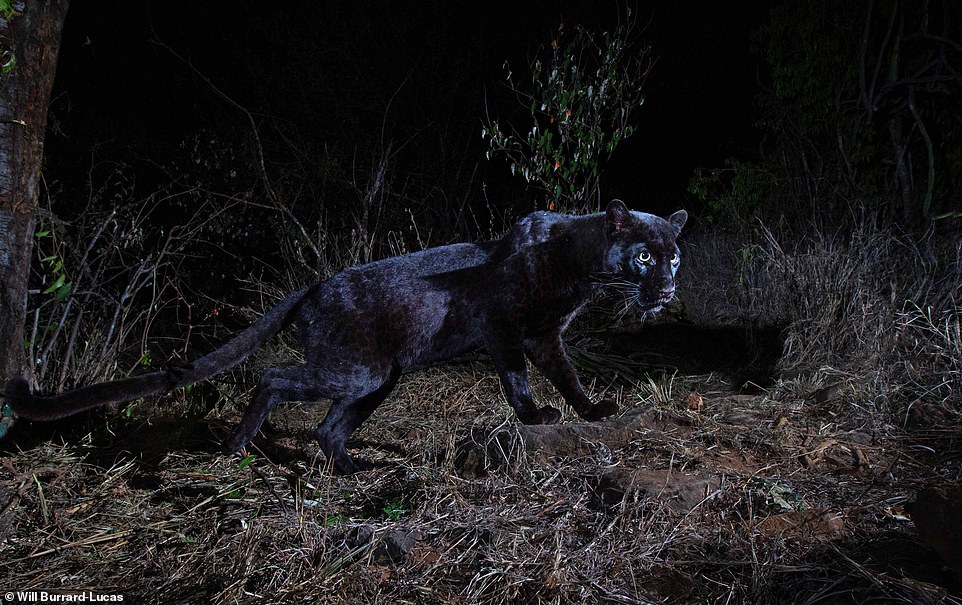 The juvenile female was spotted traveling with a larger, normally colored leopard, presumed to be her mother.

The opposite of albinism, melanism is the result of a gene that causes a surplus of pigment in the skin or hair of an animal so that it appears black. Melanistic leopards have been reported in and around Kenya for decades, but scientific confirmation of their existence remains quite rare.

Published in January in the African Journal of Ecology, these photos represent the first scientific documentation of such a creature in Africa in nearly a century.

As recently as 2017, only a single sighting had been confirmed—a 1909 photograph taken in Addis Ababa, Ethiopia, and stored in the collections of the National Museum of Natural History in Washington, D.C. Their range across much of the continent has shrunk by at least 66 percent due to habitat loss and prey decline.

“Almost everyone has a story about seeing one, it’s such a mythical thing,” says Pilfold, of San Diego Zoo Global’s Institute for Conservation Research.

“Even when you talk to the older guys that were guides in Kenya many years ago, back when hunting was legal [in the 1950s and ‘60s], there was a known thing that you didn’t hunt black leopards. If you saw them, you didn’t take it.”

There are nine leopard subspecies ranging from Africa all the way to eastern Russia. And while 11 percent of leopards alive today are thought to be melanistic, says Pilfold, most are found in Southeast Asia, where tropical forests offer an abundance of shade.

Its thought that melanism provides additional camouflage in those habitats, giving the predators an advantage when it comes to hunting, says Vincent Naude, leopard genetic forensics project coordinator for the nonprofit Panthera, who was not involved with this research.

But in Kenya, black leopards, sometimes referred to as “black panthers”—an umbrella term that refers to any big cat with a black coat—seem to occur in semi-arid shrubland.

“Our leopards live in savannah-type environments, so having that extra melanism doesn’t give them an adaptive advantage,” says Naude. Even still, given their nocturnal lifestyle, a bit of additional pigmentation certainly doesn’t hurt.

The fact the young female was traveling with her mother also suggests that her unique coloration hasn’t had an impact on familial bonding, Pilfold notes.

After hearing about Pilfold’s findings, staff at Ol Ari Nyiro Conservancy—30 miles west of Loisaba—turned up a high-quality image of a second black leopard, taken in May 2007.

Since that photo is more than a decade older, the researchers conclude it must be of a different individual, which suggests black panthers are more prevalent in Kenya than in other African countries.

But African black panthers are still so rare that researchers don’t even know if the genetic mutation responsible for the dark pigmentation is the same one that underlies melanism in Southeast Asian leopards.

Pilfold adds it’s curious that the fictional country of Wakanda, home of the superhero Black Panther, is located in East Africa, fairly close to Kenya.

“It’s a unique coincidence,” says Pilfold. “The only place where we have black leopards is where this place in the Marvel Universe appears to exist.”

True size of countries is not what you were taught

Cristiano Ronaldo’s Old Trafford Return: The Legend is Back

Debate for language law delayed, 35,569 pages need to be translated in Albanian

Japan’s PM falls in Bunker while golfing with Trump