Yes, the blockchain is truly revolutionary.Yes, bitcoin is Tulipmania 2.0.

Yes, cryptocurrency is a nail in the coffin of the bankster parasites.

Yes, digital currency is a tool of the totalitarian tyrants.

No, these statements are not contradictory. But don’t worry if you think they are. You’re just a victim of the bitcoin psyop.

What’s the bitcoin psyop? Well, look at a headline like this:

“Former Chairman of Federal Reserve to Speak at Blockchain Conference”

If you immediately think “Aha! I knew it! The Fed is behind this bitcoin nonsense, after all!” then you might want to stop and contemplate this headline from two years ago:

If so, then you have fallen for an embarrassingly simple trick. That trick is to use the words “bitcoin” and “blockchain” and “cryptocurrency” and “digital currency” interchangeably, as if they are all the same thing. They are not.

Confused? Well, fear not! Our good friends at the Bank for International Settlements have written a handy-dandy article that explains everything to you in simple, everyday language. They’ve even illustrated that article with easy-to-understand infographics!

Just kidding. Their unwieldy article on “Central Bank Cryptocurrencies” is a predictably hot mess of monetary jargon and Venn diagrams that somehow make things look even more complicated than they sound, like this: 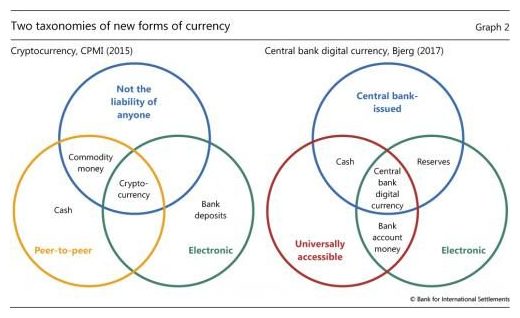 Now, to be fair, their proposed new “taxonomy of money” has real explanatory power, and the diagrams that result are genuinely insightful, but it hardly makes for light bedtime reading. So, let’s see if we can make it a little easier, shall we?

A blockchain is a decentralized, cryptographically secured ledger.

The geeks in the crowd will appreciate the fact that the blockchain is a stupendously elegant solution to some incredibly complicated problems in the obscure recesses of arcane subjects like distributed computing and payment processing. But for the non-geeks, perhaps this will suffice: Some of the oldest documents ever discovered have been ledgers of one sort or another. Medical records, legal and business contracts, accounting ledgers; as long as there has been civilization, there has been the need for secure and accurate record-keeping of transactions and events. And since the birth of civilization there has only been one way to keep those records: a system where a recognized central administrator stores, secures and updates that ledger.

Until now, that is. With the advent of the blockchain, an accurate ledger can now be maintained without a single, central point where that information is stored, maintained or updated. Registrars? Notaries? You might as well be talking about farriers and chimney sweeps.

But talking about the blockchain is like talking about the printing press. Yes, it’s revolutionary. Yes, it will change the course of history. But what, specifically, does it print? Well, whatever you want it to, of course. A papal bull or the Ninety-five Theses, the 9/11 Commission Report or The Road to 9/11, a GMO cookbook or The Anarchist Cookbook, colorful pieces of toilet paper or Federal Reserve notes (but I repeat myself).

So what does the blockchain record? Well, whatever you want it to, of course. It can be used as a tool for creating smart contracts or registering land ownership or creating decentralized cryptocurrencies.

This is where bitcoin comes in.

Bitcoin is a peer-to-peer cryptocurrency whose transactions are recorded in a public blockchain ledger.

There are three things to note about this description of bitcoin.

Secondly, bitcoin is a cryptocurrency. That means it uses cryptographic functions to secure and verify transactions on the network and to control the issuance of new units. Bitcoin conforms to a certain protocol, and that protocol defines the rules by which the bitcoin network operates. You can tweak those rules and create similar-but-separate payment systems, each with its own qualities. These bitcoin-like cryptocurrencies (Namecoin, Litecoin, Dash, etc.) are called altcoins.

Thirdly, bitcoin uses a specific kind of blockchain ledger called a “public” or “permissionless” blockchain. This means anyone can join the network and contribute to the maintenance of the ledger (“mining,” in the bitcoin parlance). There is another kind of blockchain, called a “private” or “permissioned” blockchain, that requires nodes to be invited to join the network or otherwise given permission to participate in maintaining the ledger.

OK, this is starting to get confusing, isn’t it? This is about the point where we’d need to bust out the Venn diagrams and start colouring the overlapping parts, right? Well, if you’ve followed all of this, good for you. If not, don’t sweat it. The point for today is simply to recognize that there are a lot of separate-but-related concepts here, and to talk about them as if they are all just one big monolithic thing is not just unhelpful but purposefully misleading.

So, let’s look at those Bernanke headlines again:

“Former Chairman of Federal Reserve to Speak at Blockchain Conference”

Are you at least beginning to get a handle on how those headlines are not contradictory? How it could be that a central banker could be interested in blockchain technology but dislike the bitcoin application of that technology?

If not, think of it this way: the same DVD player that can play Century of Enslavement can also play The Federal Reserve and You. The same printing press that can print Crossfire: The Plot that Killed Kennedy can also be used to print The Warren Commission. The same web browser that can take you to corbettreport.com can also take you to NYTimes.com (and no, I’m not hyperlinking that!).

So, yes, the blockchain can be used to create digital currencies that represent the very vision of a totalitarian tyrant’s wildest wet dream. Central banks could use private blockchains to administer national digital currencies that permanently record and track every transaction in the economy. That currency could be distributed through government-issued wallets that act as an individual ID and allow the government to track everything you ever purchase back to you personally. It could be used to create the perfect system of panoptic oversight, and the totalitarians could, as sole proprietors of the private blockchain, target anyone they saw as a threat for removal from the economy by simply revoking their wallet.

And, yes, the blockchain could be used to create a digital currency that represent the banksters’ worst nightmare. Free individuals could use a public blockchain to create a cryptocurrency not issued by or subject to any central authority. Or it could be used to raise untaxable cryptofunds for agoristic start-up ventures through unregistered ICOs. Or it could be used to transfer value or property instantaneously across the imaginary lines on the map that define the supposed boundaries of the would-be tyrants’ geographical monopolies without the permission of said tyrants.

Are you starting to get the picture?

Now let’s look once again at the statements that opened this article.

Is the blockchain revolutionary? Well, no decentralized, peer-to-peer ledger has ever existed before, so yes, it is that rarest of rare things: something new under the sun.

Is bitcoin Tulipmania 2.0? Yes, in the exact same sense that the dotcom bubble of the 90s was Tulipmania 2.0. Just as Pets.com and other ventures that earned (and lost) hundreds of millions of dollars in the blink of an eye were the result of a speculative frenzy, so too are the sudden run-ups and run-downs in bitcoin’s price the result of a speculative frenzy. But the busting of the dotcom bubble wasn’t the end of the worldwide web anymore than a future bursting of the bitcoin speculation bubble will be the end of cryptocurrency (or even bitcoin).

Is cryptocurrency a nail in the coffin of the banksters? Yes. Cryptocurrencies can now be (and already is being) used by millions around the world for instantaneous and virtually free international remittances, all without the aid of a bank account. Start ups have raised billions of dollars in capital through ICOs without a VC predator or investment bank underwriter in sight. More broadly, a whole host of banksters and their associated cronies in the third-party middleman parasitic class are already openly contemplating the fact that they have already been made obsolete by the blockchain technology which underlies the cryptocurrency boom. Is this the one and only silver bullet that will end banking all by itself? Don’t be ridiculous. But it’s one more arrow for the quiver.

Is digital currency a tool of the totalitarian tyrants? Well we’ve already seen how the BIS is musing about central bank-issued cryptocurrencies and we’ve contemplated how that nightmare scenario of control and surveillance might unfold. It hardly takes a Nostradamus to envision how the forces of centralization are going to push as hard as they can to put the cryptocurrency genie safely back in the bottle of central-bank issued fiat.

Are any of these statements contradictory? Nope. But the bitcoin psyop might have made you think they were. And now you know better.

So, here’s a test of your newfound, nuanced understanding of the intricacies of digital currencies. Can you explain how this headline:

If so, then give yourself a pat on the back. You’ve just seen through the bitcoin psyop.