Today, he met with Government officials and president Gjorgje Ivanov. Not surprisingly, Sullivan spoke of the Deep State “Prespa Agreement” as if it’s holy water.

With good reason. This genocidal agreement will solidify the US occupation of the Balkans leaving Serbia isolated – but not for long. If only the Serbs knew what awaits them (they will fair much worse than Macedonia), but on that later. 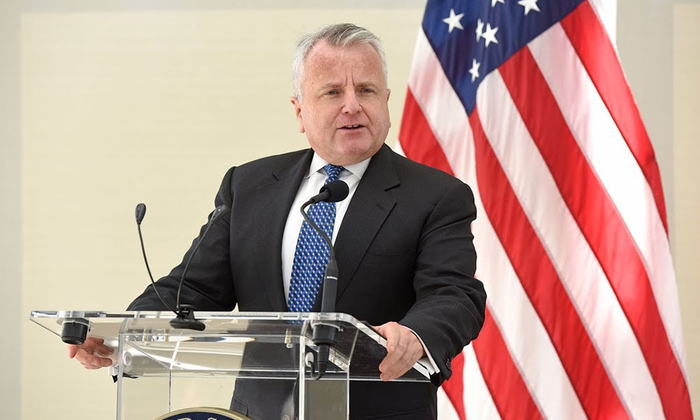 “I am proud to be here on behalf of the United States to give support to what the political leaders and citizens of the Republic of Macedonia want, and that is entry into NATO and the EU. We are not here to fuel something, but to support the decision taken under the prime minister’s brave leadership for the country’s EU and NATO membership, Sullivan said.

It appears that Sullivan is so detached from reality, to a point where his statement is laughable. 75% of the Macedonian citizens are against the Prespa Agreement and by default against NATO and EU. Has anyone mentioned to Sullivan the Failed Referendum? Or is this the famous American case of “we’re going to run with our narrative and disregard facts because they don’t fit our agenda“.

And if Sullivan referred to Zaev’s criminal junta as “brave leadership” because everything they have done in Parliament has been illegal and criminal, then yes, that is very brave indeed.

Sullivan pointed out that it is not a secret that Russia opposes the Prespa Accord and no one has any doubt that it will do everything in its own interest and against the interest of the citizens of Macedonia to undermine the process of implementing the agreement.

No, Deep State deputy secretary. It’s not Russia that opposes the accord. It’s the Macedonian public that overwhelmingly opposes it and it is your criminal puppets who are working for your interests and are attempting to illegally implement it.
Besides, what gives the US the right to be the chief meddler in Macedonia, and not allow others to meddle?

Sullivan then went on to say that the Russians are meddling everywhere, including the US elections which resulted in the installation of Trump, his boss, as president.