DPNE’s Mickoski and two of his officials – turned journalists have published more articles to local media than journalists themselves. VP Aleksandar London Nikolovski keeps embarrassing himself on TV, first writing then stating that there isn’t anything they can do, it’s done. The agreement is the agreement. SDS has 80 MPs and they can do whatever they like, people should accept that, stated Nikolovski in his latest interview for Alfa TV. A week earlier Nikolovski has stated the agreement isn’t good, only few days later to say it’s good. Nikolovski in race with Zaev who would win the coveted GMO product of the year award in changing their mind mid-sentence.

Desperate and ignored Mickoski has asked the public not to discuss the DPNE, (yes, he actually said this) according to him, the SDS had more traitors in Parliament, while the DPNE only 8. And, as much as we don’t like to agree, his math is spot on.
Even a certain Martina Antik, an advisor at the DPNE, has published several columns where she too is asking the public to turn their focus to the SDS and forget the lesser treason by the DPNE. We thought advisors’ job is to advise, but no, at the comatose DPNE they are all journalists.

What Mickoski doesn’t seem to understand, just like his predecessor Gruevski is that the public has taken aim at the DPNE for one very simple reason: repeatedly joining the SDS in committing treason.

While Macedonia’s disease SDS has publicly stated, over and over again, that they are traitors and work on destroying Macedonia, work for foreign interests, will never represent Macedonians, in fact will delete us from the Constitution, DPNE publicly pretends to represent the interest of Macedonians, while privately sides and joins the SDS in Parliament to destroy the country. This is why, the public points the finger at the DPNE! But, what the public doesn’t know is that Mickoski was inserted into the position as the head of the DPNE by Mijalkov (like everyone else). Mickoski had no competition (imagine that!) at DPNE’s Congress and was the only candidate for the head of the party. Mijalkov did his job “persuading” others not to throw their hats into the ring and nominate themselves. The way he was installed, Mickoski is Rangelova #2 at the DPNE. Both were complete unknowns before being suddenly elevated to the top!

We went on the record with Rangelova, stated she is the trojan horse, she is a huge liability to the party. Two weeks later she came out swinging saying she would have given Zaev-Mijalkov a vote if the junta was missing a vote. The next day she quit.
Now once again we’re going on the record in stating that you, Mickoski is and continue to be a huge liability to the already dead DPNE.
Antonio Miloshoski should have taken Mickoski’s spot as the head of the DPNE, but he wasn’t even allowed to nominate himself. It’s what you’d expect from a party run by narco boss Mijalkov.

But not all is lost for the DPNE clowns. They are taking action! No, nothing to do with organizing protests, or trying to preserve the country. The clowns are not allowed to do this per Mickoski’s agreement with Mijalkov-Zaev->Baily.
DPNE will launch a lawsuit in Strasbourg to see if they can unfreeze their properties. This is the new priority for the ‘lesser traitors’. They’re going to keep themselves busy with the lawsuit for the next few months. 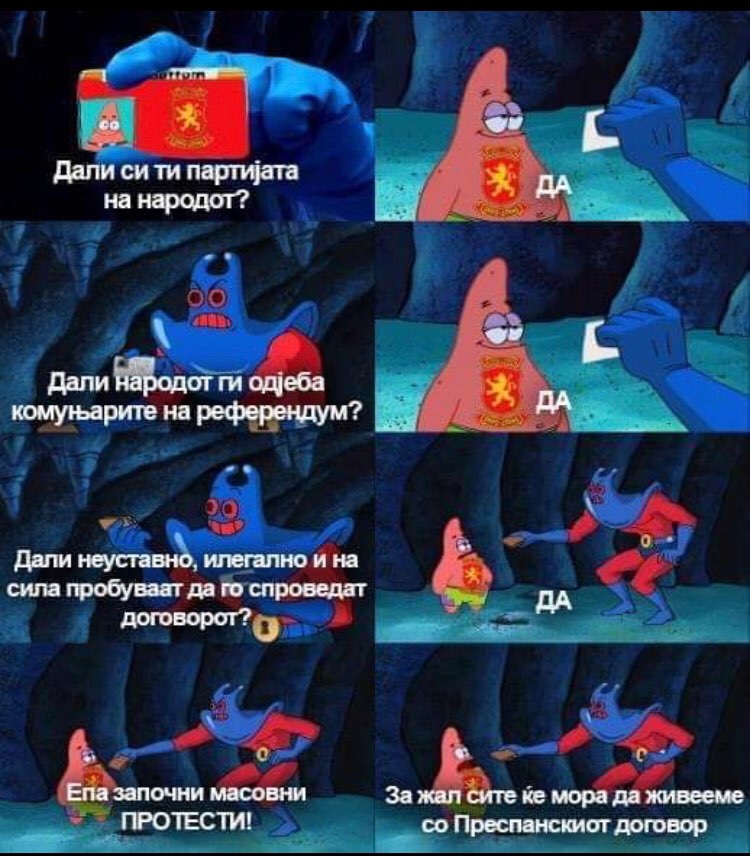