An underwhelming protest, underwhelming display by Mickoski is the result of DPNE’s exhibition earlier today, attended by our own Pero Stamatovski. 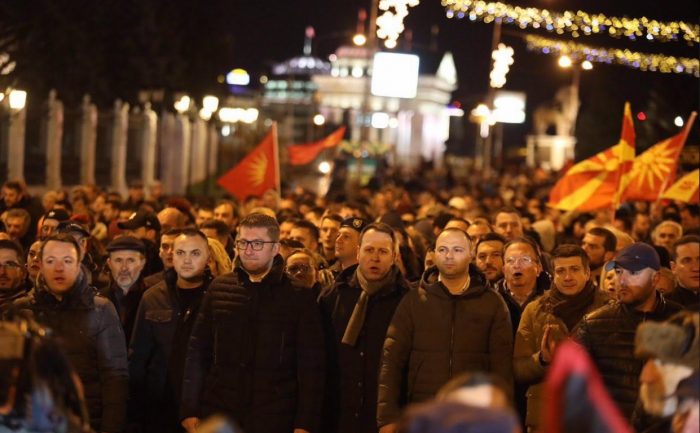 If the DPNE wasn’t concerned before, they should be now. The crowd attending the protest was on par, even smaller than the one organized by the Boycott movement. DPNE did not have any of the challenges the Boycott movement had, who held their protest during terrible weather conditions in addition to the massive police raids preventing protesters from attending.

DPNE’s leader Hristijan Mickoski did not mention the name negotiations and the ongoing insanity in Parliament. The focus was on the following topics:
– Air pollution
– GDP
– Failure to bring FB and Google
– Wages
There was no mention of the name changes and the fact that DPNE is helping SDS complete the Deep State project to rename a country and erase the majority of the population out of existence. MINA’s Pero Stamatovski stated the mood in the crowd was one of disappointment and bewilderment at Mickoski’s speech.

Mickoski proclaimed his party “will defeat Zaev, whether via early elections, or in regular elections, whenever they came“. We don’t anticipate Zaev will leave his post 1 year early the way Gruevski did it every mandate.

Mickoski announced protests every Wednesday in front of the Government HQ, and each weekend in various cities across the country, seen by no one and heard by no one.