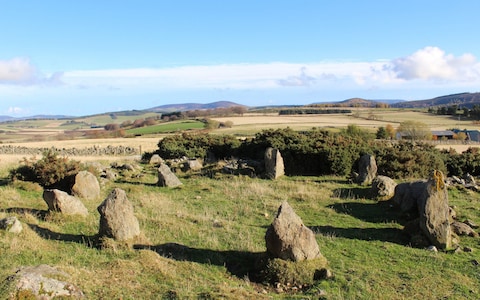 When archaeologists announced the discovery of an ‘amazing’ 4,500-year-old stone circle on an Aberdeenshire farm in December they admitted it was odd that it had remained hidden for so long.

With its diminutive circumference and smallish stones, experts said the Neolithic monument in the parish of Leochel-Cushnie was unusual, but hoped it might change their understanding of prehistoric building.

Sadly such optimism was not to be realised. This week a farmer who had once owned the land got in touch to say he had built it himself in the 1990s.

Neil Ackerman, historic environment record assistant at Aberdeenshire Council, said: “These types of monument are notoriously difficult to date. It is obviously very disappointing to find out it was built only 20 some odd years ago but it also adds an interesting element to its story” – stated Ackerman.

Now, just put a little bit of thought into how ‘correct’ are previous dates on other structures given by people who self-identify as ‘Scientists’.  What led them to believe this structure is 4,500 years old? It’s evidence free science, all based on theories, perceptions and cool stories.

In the end, it all boils down to money and funding – the crazier and more ‘interesting’ of a story they come up with, the more they can apply for grants, it’s all business.

Alexa, Tell me how many Chinese kids worked to build you