PROTESTS have broken out in the streets of Sofia, Bulgaria with demonstrators burning EU flags because they feel ignored by the bloc.

Protests kicked off in Sofia on the same night as Bulgaria takes over its first Presidency of the European Council from January 2018 until June 2018. 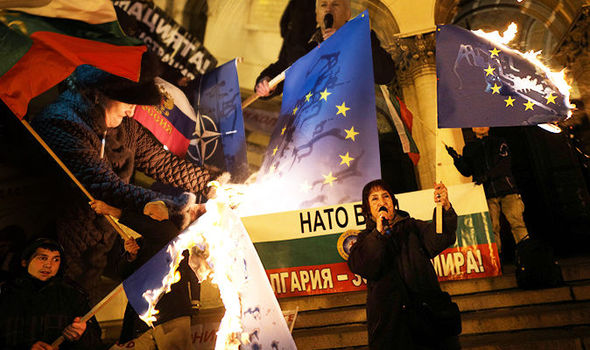 EU commissioners are in the city as Bulgaria begins its presidency – and guests at the opening ceremony of the presidency in Sofia, including European Parliament President Antonio Tajani, European Commission President Jean-Claude Juncker and the Council head Donald Tusk.

The Sofia Globe reports 11 protests are being held across the city tonight.

Former president Rossen Plevneliev said: “These protests are not a symbol of future political action, but they are telling us something important – the whole political elite has not done its job over the years.”

George Pykov, a Bulgarian who is currently an executive committee member for Young Independence and studying Law at the University of Portsmouth told Express.co.uk: “The EU has no interest in Bulgaria or any Eastern European country.

“Issues that were meant to be solved have not, and I’m pleased to hear that Bulgarians are fighting back against an expansionist and fanatic Union.

“I and many other Bulgarians living in Britain hope that, one day, we will see a Bulgarian exit from the EU to join the UK in an exciting new, independent future.

“It is time for Bulgaria to be free from mob rule.”

Lilyana Pavlova, Bulgaria’s minister for the EU Presidency, said last Friday: “Personally, I would rather not have the Presidency begin with protests, whatever their goal is … it’s just that all the international media will be here to see Bulgaria.”

The Interior Ministry Employees Syndicate, the largest police union, said it planned to greet the EU official cars with banners. The union has been campaigning for a 15-per cent pay rise for months.

Other groups protesting include a planned march in defence of the ratification of The Council of Europe Convention on preventing and combating violence against women and domestic violence and The Alliance for Defence Against Violence Based on Gender, organised a march in front of parliament, to “say STOP to ignorance and violence in our country!”