The US military has sent a number of M1 Abrams tanks as well as heavy armored vehicles for a massive multinational exercise, Agile Spirit 2017, which is kicking off in the former Soviet republic of Georgia (Gruzia).

Quick history
Georgia, in 2008 followed the American advice to attack unarmed Russian peacekeepers in South Ossetia, killing 18 in the process. Official Tbilisi further indiscriminately shelled the civilian population killing over 1,000 in an attempt to regain control of two provinces. The cowardly attack on defenseless population occurred as Putin was watching the opening Olympics ceremony in Beijing.
Official Tbilisi felt ‘strong’ as it was given over 250 American troops to fight on their side. Keep in mind, the residents of South Ossetia are Russian citizens. The war lasted 5 days thanks to the introduction of Russia’s 58th Army who entered the conflict to defend their citizens in South Ossetia and Abkhazia. Geoergia’s army and their American mercenaries were decimated. The panic was so great that Georgian soldiers (the ones who weren’t killed) fled to the capital and beyond it, allowing the Russian Army to reach Tbilisi unopposed should they wish. Tbilisi, lost over 100 tanks in the war, while over 250 were abandoned and later taken as war trophy by Russia. Tbilisi also lost 22% of its territory and 50% of its Black Sea coastline.
Lesson learned, right?

Not really. This weekend, some 500 US troops along with M1 Abrams main battle tanks and LAV armored fighting vehicles have arrived in Georgia for the Agile Spirit 2017 exercise. 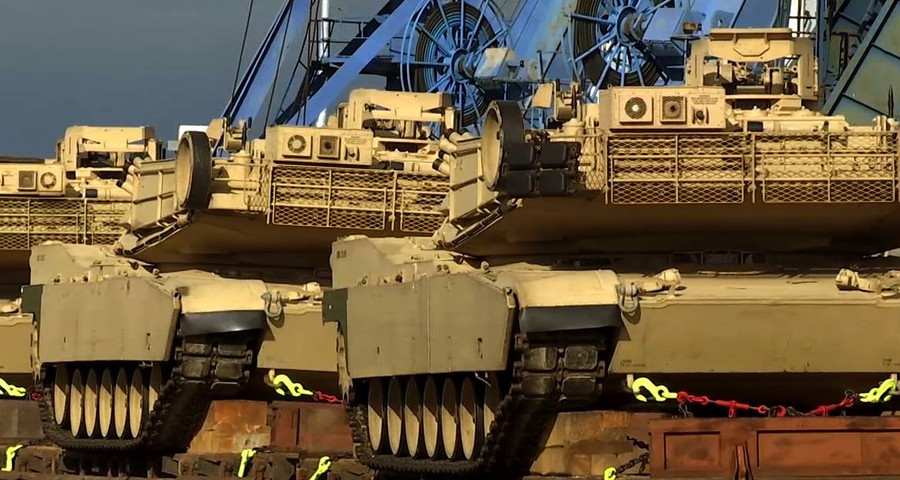 Georgia’s Defense Ministry has released a video that showed the unloading of the tanks – painted in desert camouflage – at the port of Poti.

US heavy armor will then be transported by train to Vaziani, where the main stage of the war games will begin.

The war games are expected to take place at the Georgian military’s Vaziani training center, involving US soldiers as well as approximately 1,000 troops from Georgia, Armenia, Azerbaijan, Bulgaria, Latvia, Romania and Ukraine.

“This is the seventh [edition] of the annually scheduled multilateral exercise designed to enhance US, Georgian and regional partner interoperability and strengthen understanding of each nation’s tactics, techniques and procedures,” the Pentagon said in a press release.

Georgia, an active contributor to NATO deployments, has long planned to join the bloc, while Russia has long criticized the alliance for coming closer to its borders.

In a June interview with film director Oliver Stone, Russian President Vladimir Putin described NATO as an instrument of American foreign policy, and said the alliance’s members inevitably become US “vassals” that can neither question or oppose their master.

USA ought to focus on production instead of dollar printing