Somewhere in Britain, a sad, sad man is mourning the loss of a jet black Ferrari 430 Scuderia, which went up in flames an hour after it was purchased Thursday afternoon.

The driver survived the accident that consumed his vehicle in a “miracle escape,” according to local authorities, but as pictures prove, the same cannot be said for the popular race car.

​The $260,000 car met its fate off the M1 highway near South Yorkshire after the driver lost control of the flashy vehicle in wet conditions. Seconds later it “went airborne and burst into flames” about 50 meters into a field, South Yorkshire Police reported.

For those curious about what the Ferrari looked like prior to the fireball, take a gander: 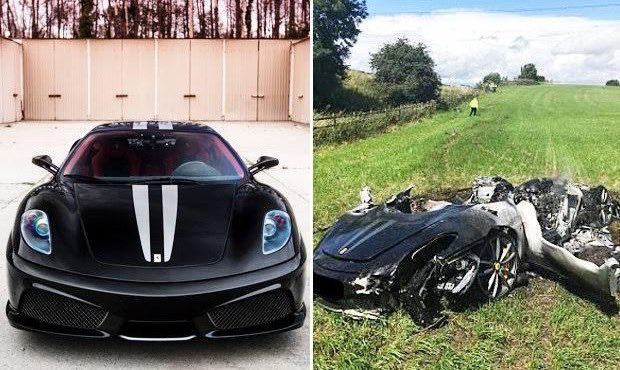 After firefighters put out the blaze and officers discovered the driver had non-life threatening injuries, they quickly realized his spirits weren’t exactly bubbly, despite his near miss.

“Officers asked the driver what sort of car he had, to which he replied ‘it was a Ferrari,'” their press release read. “Detecting a sense of damaged pride [the car-less man] said ‘I’ve only just got it, picked it up an hour ago.'”

Although officials say speed was not a factor in this incident, they are pressing drivers to exercise a certain amount of caution moving ahead.

“Over the past couple of weeks there have been a number of collisions where driving styles have not reflected the road and weather conditions,” the statement added. “Please take more care!”

According to Ferrari’s website, F1 racing legend Michael Schumacher “spent a lot of time testing the 430 Scuderia when it was being developed.”

Time to go back to the drawing board?

Struga and Shtip say “NO” to migrant camps in their cities

CIA off to a slow start in creating “Free Venezuelan Army” #Syria 2.0