“The rule of law remains the fundamental principle upon which EU member states and accession candidates alike (hard to believe Hahn would write this after backing the lawless insanity in Macedonia). It is essential for the credibility of the EU … I expect a sound explanation from Victor Orban”, Hahn wrote in regards to Gruevski receiving a political asylum by an EU member state.

Hungary’s PM Orban did not consider it necessary for him to either reply or explain anything to Hahn. Orban is an elected Prime Minister of an EU state, while Hahn is quite far from anything even remotely close, instead he is an unelected EU official with the backing of Soros.

It’s why Zoltan Kovac, an official in Orban’s Government office briefly responded to Hahn with a great dose of ridicule advising the EU bureaucrat to read his own reports in regards to Macedonia.

“Sounds explanation? Start reading your reports on Macedonia from March 2018 on the “risks of political influence on the judiciary” and see the October 2017 Prison Report.” 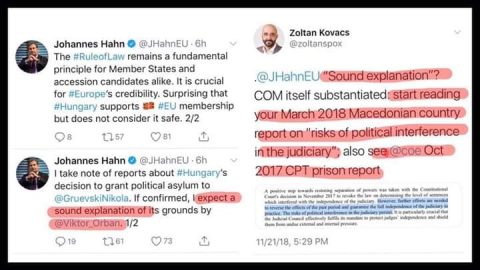