DPNE’s VP Aleksandar Nikolovski makes seldom appearances on TV. When it does, people take notice, and it’s never in a good way.

As DPNE intends to grab back their power, Nikolovski certainly forces people to rethink their allegiance to Macedonia’s oldest political party. 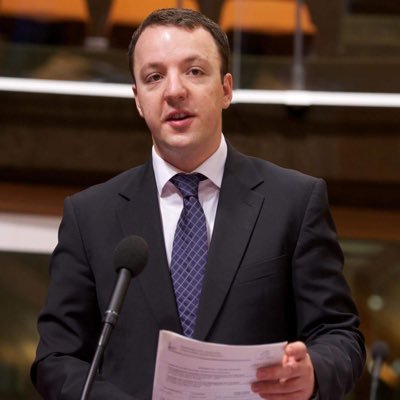 He first came to prominence as Macedonia’s illegitimate Government decided to side with the UK in their over the top false flag “Skripal poisoning” case and expel an employee of the Russian Embassy. Though no one asked for DPNE’s opinion, Aleksandar Nikolovski came running out of his hole like a groundhog and announced the DPNE strongly supported the Government in expelling a Russian diplomat.
It took a child named Aleksandar Nikolovski, somehow a VP at DPNE to mark the death of the party. His statement marked the complete sellout of the party and earned him a nickname “Aleksandar London Nikolovski”.

We looked into this kid. His qualifications are ‘stellar’. Just like Shekerinska at the SDS, his English is impeccable. That’s about it. As a result the DPNE put him in every imaginable organization where English is needed and since he speaks it well, he got promoted – you can’t represent the party at higher level if you yourself are low level. This probably makes no sense to most, but in Macedonia it very much does.
The kid has the intellect of a shovel, is giddy just to be in the presence of ‘foreigners’, will sell you out in a second and often does.

After his fiasco visavi Russia, Nikolovski disappeared. Meanwhile, he got married.
Then, he showed up again from his hole. And once again, using Shekerinska’s level of intellect he proclaimed the DPNE will improve the agreement with Greece, as the one signed by Zaev isn’t good. Yes, read that again. We have never seen anyone with the capacity Nikolovski has to destroy the future of a party with one sentence. Nikolovski’s statement once again caused an uproar among DPNE members, but should it? Sure, it says a lot about how low the DPNE has sunk and the sort of people who are running the party, but it shouldn’t surprise anyone. Besides, they don’t call you ‘London’ for nothing.

Among other, Nikolovski is the perfect example why Macedonia is a lawless pitt. Criminal government with bought opposition will never bring about order.