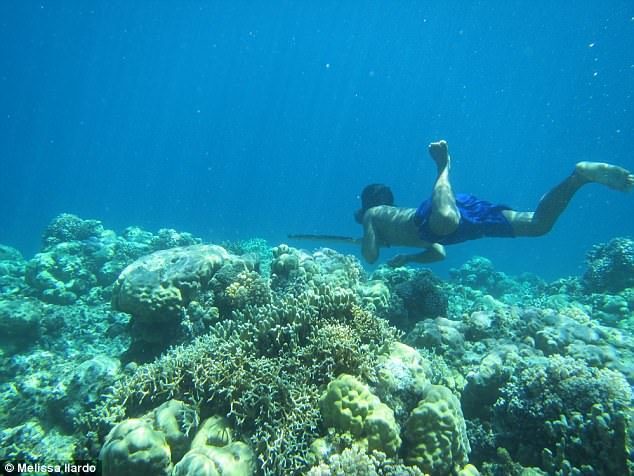 A population of Indonesian ‘fish people’ have evolved spleens are 50 per cent larger than normal people, enabling them to free dive to depths of more than 200 feet (61 metres).

The genetic change discovered in the Bajau tribe – who can hold their breath for 13 minutes – is the first known example of a human adaptation to deep diving, researchers found.

For more than 1,000 years, the Bajau – known as ‘Sea Nomads’ – have wandered the seas of southern Asia in house boats, catching fish by free diving with spears.

Now settled around the islands of Indonesia, they are famous for their extraordinary breath-holding ability.

Members of the tribe can dive up to 230 feet (70 metres) aided by nothing more than a set of weights and a pair of wooden goggles.

The spleen plays a key role in the ‘human dive response’ that puts the body in survival mode when it is submerged under cold water for even brief amounts of time.

As the dive response kicks in, heart rate slows, blood is directed to the vital organs, and the spleen contracts to inject oxygenated red blood cells into the circulation.

Spleen contraction can boost oxygen levels in the body by 9 per cent.

The new study found that the spleens of the Bajau people are 50 per cent larger than those of their land-dwelling neighbours, the Saluan.

Lead scientist Melissa Ilardo, from Cambridge University, who embarked on the research as a PhD candidate, said: ‘There’s not a lot of information out there about human spleens in terms of physiology and genetics, but we know that deep diving seals, like the Weddell seal, have disproportionately large spleens.

‘I thought that if selection acted on the seals to give them larger spleens, it could potentially do the same in humans.’

Because the Bajau do not dive competitively it is uncertain precisely how long they can remain underwater.

One of the tribe told Ms Ilardo that he had once dived for 13 minutes.

The evidence showed that Bajau spleens were permanently enlarged, and did not get bigger simply as a response to diving.

‘We can adapt to a number of different extreme environments just through our lifestyle changes or our behavioural changes, so it wasn’t necessarily likely that we would find an actual genetic adaptation to diving’.

DNA analysis showed that the Bajau have a gene called PDE10A that is lacking in the Saluan.

The gene is thought to alter spleen size by adjusting thyroid hormone levels.

Ms Ilado said: ‘We believe that in the Bajau they have an adaptation that increases thyroid hormone levels and therefore increases their spleen size.

‘It’s been shown in mice that thyroid hormones and spleen size are connected.

‘If you genetically alter mice to have an absence of the thyroid hormone T4, their spleen size is drastically reduced, but this effect is actually reversible with an injection of T4.’

The study, published in the journal Cell, may help scientists to understand acute hypoxia, a condition in which body tissues experience a rapid loss of oxygen.

Acute hypoxia is a leading cause of complications in emergency care.

Cat found etched into desert among Nazca lines in Peru