The fate of the Greeks of the Ottoman Empire was decided at Lausanne on the 30th of January 1923 when Greek and Turkish leaders signed what’s known as the Convention Concerning the Exchange of Greek and Turkish Populations.

It was the first time in history that the international community accepted and imposed an uprooting. The compulsory exchange was based on religion and involved the expulsion of Greek Orthodox (Rum) Christians who were living in Turkey and for Muslims who were living in Greece.

While sources state a figure of approximately 1.3 million Greeks being exchanged for 355,000 Muslims, the actual number of Greeks expelled under the auspices of the convention was only 189,000.

The remainder had already fled in scenes of indescribable panic following the Kemalist victory over the Greek Army.

The exchange excluded the Greeks of Istanbul and the Muslims of western Thrace.

Pictured below: Ismet Pasha (Turkey) signing the Convention on behalf of Turkey and Eleftherios Venizelos signing for Greece. 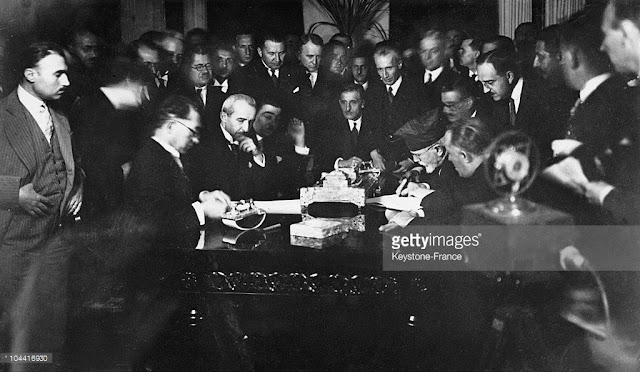