Is it rugby, or is it handball? When Slovenia and Macedonia took to the Zagreb Arena for their opening match in the European Handball Championship in Croatia, it certainly looked like a rugby match for the gold medal!

Thanks to Slovenia’s UFC players and anti-handball, brutal physical play marked the entire match, which resulted in 22 minutes of expulsions for Slovenia, and 12 for Macedonia. Although this was only the group stage of the European tournament, we don’t know if we’ll see a better match the rest of this tournament, an echo from the EHF broadcaster who called the match. Slovenia appeared to be heading for an easy win after taking a 5-2 lead on Macedonia, mostly thanks to the Slovenian keeper Skok who defended his goal in spider-like fashion, stopping the majority of the shots in the first 15 minutes. Macedonia led by the masterful Raul Gonzales was hanging on, as he kept trying to put in fresh bodies in the game to keep clashing with Slovenia’s defense in an effort to tire them, which was a toll order. Slovenia was so physical, Macedonia scored their first three goals via penalties.

As the game continued, Lazarov managed to find a way to Skok’s goal, slowly but surely inching back to tie the score at 11-11 via Filip Taleski goal in the last second.

Macedonia surprised Slovenia by playing a very fast paced game to open the second half in which it took a quick four goal lead 15-11. Manaskov missed a glorious opportunity (missed an empty net) to increase the lead to five goals which resulted in a goal by Slovenia via a quick counter attack.

At that point, Slovenia managed to get in the match, tying it at 21-21. Macedonia missed, then Slovenia took the lead, which surely wasn’t a good sign. Then Gonzales called for a time out. After consolidating Macedonia’s players, Macedonia took the lead tied the match twice, and at the end took a 25-24 lead which turned out to be final result. 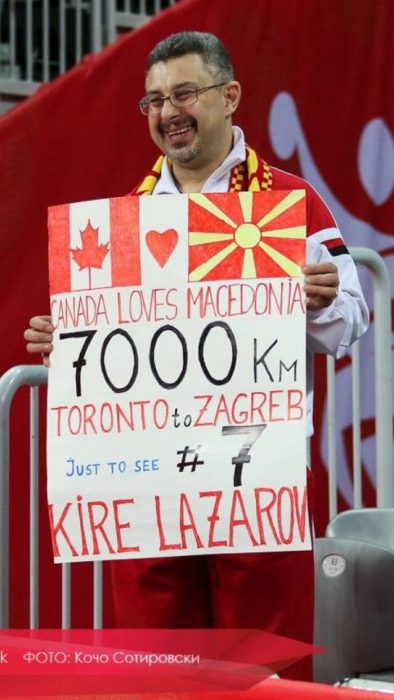 This was a key win for Macedonia in the championship, and things will get even better with a win over Montenegro on Monday.

Lastly, how Veles residents commented on probably the most famous Veles native Dejan Manaskov 1st half and 2nd half play. Manaskov did show subpar play in the first half, but awoke in the second and was our leading scorer with 8 goals. Kiril Lazarov scored 7, and his brother Filip Lazarov scored the winning goal.

WTO Greenlights EU Tariffs On $4 Billion In US Goods