“From September 2018 until sometime April 10, 2019, I am constantly blackmailed by a group of people who extorted a large sum of money from me,” Orce Kamcev said in a statement made before prosecutor Vilma Ruskoska on May 2nd this year. 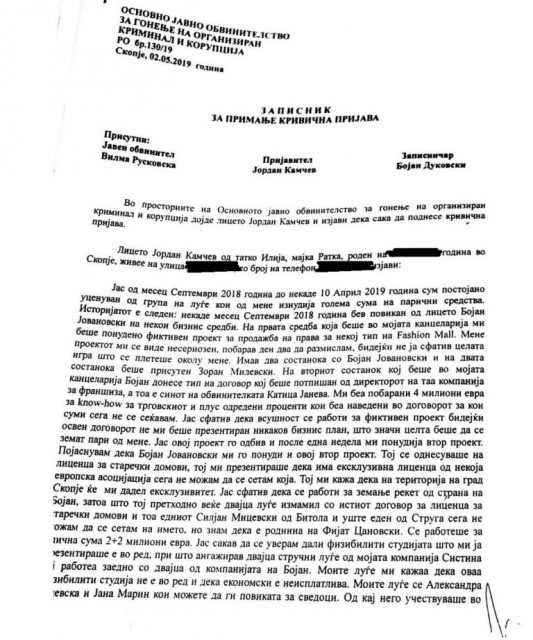 The racket started when Bojanov Jovanovski – Boki 13 requested a meeting with businessman Orce Kamcev, where Boki offered him a shopping mall project. According to Boki 13, it was a fashion mall, and as Kamcev pointed out the project was not serious, and he immediately rejected it.

After Jovanovski was rejected, he returned with a second contract at a different meeting demanding four million euros, the contract had already been drafted and initialed by Katica Janeva’s son Laze Janev. The contract required 4m euros for an alleged franchise.

I realized that it was actually a fictitious project because no business plan was presented to me except the contract, which meant the purpose was to take money from me, Orce Kamcev clarified in a statement made before prosecutor Ruskoska.

Kamcev points out that such plans for nursing homes were offered to Siljan Micevski from Bitola and Adrian Amzovski from Struga (Fiat Canovski’s brother-in-law). The alleged projects cost 4m euros.

After being rejected for the second project, Boki Tredici managed to get Orce Kamchev to pay him 180,000 euros for advertising, although, at that point, Kamcev said in his statement before Ruskoska, neither he nor his companies needed advertising.

But that was not all. After paying him 180,000 euros, 90,000 euros through Sistina’s account and 90,000 euros through OK idea, Bojan Jovanovski began posting joint photos with prosecutor Katica Janeva on Instagram, saying something big is in the making. A few days later, Kamcev was detained for his involvement in the “Empire” case.

Immediately after his detention, on Sunday, November 10, Orce Kamcev’s wife, Ana Kamceva, was called to an apartment in a secret location in the Kapistec neighborhood.

I was detained as I said on Friday, November 8, and on Sunday my wife was called by Zoki Milevski to meet with Vase Dimiskov, a lawyer from Skopje. In the evening, on Sunday, my wife was taken to a secret apartment in the Kapistec neighborhood. My wife and Zoki got to the apartment, and Vase Dimiskov was waiting for them in the apartment, businessman Kamcev clarified in a report to the Prosecution for Organized Crime.

Lawyer Dimiskov’s overture to extorting money began with telling Jordan Kamcev’s wife that he had told her husband earlier in the summer that he had to “give some money” to make interventions into the investigations against him. Moreover, Vasil Dimiskov, brother of judge Vesna Dimiskova, in August 2018 tried to extort money from Orce Kamcev.

The businessman did not take it seriously then, although Dimiskov indicated that there were special investigative measures brewing against him. Kamcev refused any cooperation with Dimiskov, because he claimed he felt innocent, adding even if there were such measures against him, there was nothing to hide.

… Vase asked her (Ana Kamceva) 2, 4, 6 million euros, depending on the option, telling her that a larger group of people should be paid out the amount and that this group also included prosecutor Lile Stefanova and his sister, judge Vesna Dimiskova, who would retire after this, adds Kamchev.

Asked by the prosecutor how she would retire when she was not of age, Kamcev said:

Because the sum was so high, and judge Dimiskova’s career would have ended after that. 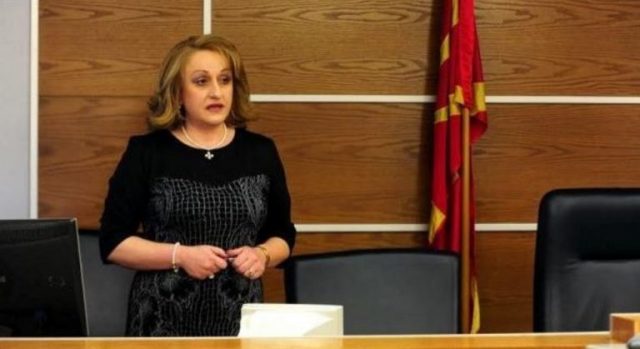 Vesna Dimiskova, the corrupt judge who acquitted Zaev in the “Bribery” case

In late November, before Orce Kamcev’s detention was replaced with house arrest, Bojan Jovanovski contacted Ana Kamceva via Zoki Milevski-Kiceec blackmailing her with 500,000 euros in exchange for lifting her husband’s detention.

To show his seriousness Boki 13 invited Ana Kamceva to his home in the village of Orman, where she went together with Zoran Milevski-Kiceec. As Kamceva explains in a statement to the prosecutor, when she got there Sergej Varoslija was dying Boki’s hair.

Opposite them was Special Prosecutor Katica Janeva, who assured Ana that if they were given 500,000 euros, the detention would be replaced with house arrest.

And so it was…

Ana and Orce Kamcev managed to collect 350,000 euros within a few days, taking the remaining 150k as a loan from Kiceec. Two days later, Orce Kamcev was transferred to house arrest. After he was put under house arrest, the most frequent guest of the Kamcev family was Boki 13, who explained what Orce would obtain for 5 million euros and what for 8 million euros.

Eight million seemed to be the way for the case to end up in the SPO, and if the Supreme Court ruled that they were not competent to handle the case, Katica would send the case to the regular prosecution without evidence, that is, destroy the evidence allegedly available to them and this option cost 5 million euros. This is also evidenced by the fact that there was a fake flood in the basements of the SPO building, where evidence in the “Empire case” in which I am one of the accused was destroyed, claims Orce Kamcev in a statement given to prosecutor Vilma Ruskoska.

Orce Kamcev knew from the very first moment, as he said in his statement, that he would not give them money, but as he says “I offered them this, just so that I could gather evidence that they were extorting money from me”.

Imagine, not only did Katica Janeva and Bojan Jovanovski (Boki 13), along with Lile Stefanova and Vesna Dimiskova, “scoop” five million euros, deliberately flooding the SPO premises to destroy evidence of an alleged crime and thereby obstruct justice. What is perhaps most interesting is that Radmila Sekerinska, Nikola Dimitrov, and the boss Zoran Zaev, were constantly informed of the extortion throughout this whole period. On one occasion, during an altercation between Boki 13 and Orce Kamcev over the denominations in which the racket was paid, Boki tried to contact Katica Janeva, but she was not available because she was at a shooting range in Kamnik and then at dinner with Radmila Sekerinska.

In the evening I know that Bobo Jankovski, Radmila Sekerinska’s husband came to see me with a friend to watch football and we laughed with Boki 13 because he told me that Radmila Sekerinska would be with him at dinner, with Katica Janeva. The next day he showed me photos of the dinner. In this way, Boki 13 abused his acquaintance with politicians to show us how powerful he is, Kamcev points out.

Boki did to Cvetan Pandeleski the same he did to Orce Kamcev, and in a few months of racketeering, Boki managed to get three million euros only from Orce and Cvetan. Boki 13’s close associates in this operation were also Deputy Parliament Speaker, Frosina Remenski and her husband employed in the UBK, Jovce Remenski, who were protecting his back and perhaps his ass throughout this period.

It turns out that the only institution that really did its job, in this case, was the UBK, but also the Prosecutor’s Office for Organized Crime. They learned this lesson after Kamcev received instructions from his “friends” from Sofia to record and document all of his contacts and meetings so that he can file criminal charges in the future.

Orce and his lawyer went to the SPO premises for a meeting with Katica Janeva, and prosecutor Lile Stefanova was also in Janeva office, who, on Janeva’s order, left the room to avoid listening to her conversation with her victims. Asked by lawyer Antonio Apostolski what will happen to Supreme Court, Katica briefly responded that “the job with Boki should be done.”

That Zoran Zaev was involved in the racket is also clearly seen from the statements of other damaged parties and witnesses, but the most worrying thing is Orce Kamcev’s statement, which says that Zaev instead of bringing the culprits to justice, he warned Kiceec and Boki 13 that Orce Kamcev had reported them for racket and blackmail.

Asked whether after the meeting with Prime Minister Zaev, he had contact with Bojan Jovanovski or Katica Janeva, Kamcev said no, but I had a communication with Zoran Milevski, who had received information that I had reported the case, I think from the Prime Minister, it is said in the prosecution’s minutes from Kamcev’s statement.

Imagine that Zoran Zaev warned, as he said the “fagot” and Kiceec that there is a report against them and that they should terminate all contacts with Orce Kamcev.

Not only is he involved, not only he helped and warned them, Zoran Zaev also lied that he, and not Orce Kamcev had reported the case.

Zoran Zaev lied that he did not meet Zoran Kiceec.

Zoran Zaev lied that he did not meet Bojan Jovanovski aka Boki 13.

And finally, Zoran Zaev is lying that he didn’t take a million from the racket.

This is also explained by Orce Kamcev’s wife, Ana, who in her statement says that after Zaev told Kiceec that there was a report against them, he and Bojan Jovanovski stopped contacting the Kamcev family.