The SDSM leadership certainly is good at one thing, and one thing only: Innovation on how to steal as much money as possible from Macedonia’s taxpayers.
During the past year of Zaev’s illegal reign, we have noted absurd level of corruption on every imaginable level, from awarding Government contracts to non existing companies, to Zaev’s brother being awarded countless of Government contract where he de-facto controls supply and transport of minerals in the country, to a DUI owned gas station named “Pucko” receiving over 40 million euros in Government contracts for gas and oil supply… The stories are absolutely endless and it’s only been a year.

If the above examples aren’t enough, the corruption has been so massive in the past month that even journalists have a laugh as they are reporting it.

Millions of euros of Government innovation grants have gone to Zaev and his VP Angjushev own companies or the companies of personal friends.
Macedonian scientists have waited for years to get any sort of grant for their research, for companies who have a lengthy history of doing research in the medical, tech, metallurgy and other fields, and once again they are left empty handed.

Instead, Zaev’s mother-in-law Cvetanka Laskova suggested to the SDS leader to dish out money to the wife of her son. A whopping 330,000 euros were given to a phantom “IT firm” that was registered as a company four weeks prior to getting the grant. It was clearly registered just so it can receive the grant. The company is called “decode – me”, and Zaev’s in-laws don’t know what it does, but now with the 330,000 euros in the bank, they will think of something… 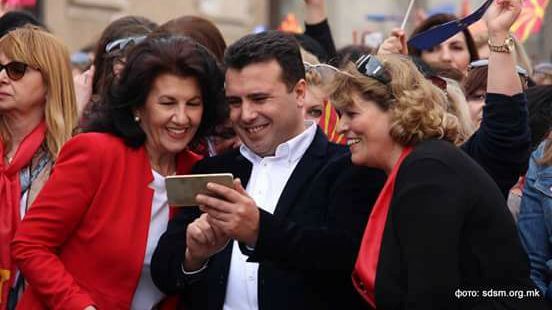 Kocho Angjushev, The Vice Prime Minister, who is believed to be worth over 200m euros (he controls the electric supply in the country) despite awarding himself over 50m euros in electricity contracts, he pocketed over 700,000 euros from the “innovation” grant for a company that was registered days before getting the grant. It appears the innovation aspect is registering the company itself.

The Minister of Health, Mr. Filipce awarded an absurd 35m euros Government contract to an individual (the name was never released), to provide medical supplies to the country. No other individual was allowed to bid for the contract, it was this one, unknown person with a company that no one has ever heard of. After huge public outcry that the Minister of Health is endangering the safety of hospitals and patients, he was forced to nullify the contract. Knowing the SDS, it would not be surprising for the contract to be awarded to the same individual, but using different avenues.

The corruption examples are endless and well noted by the Macedonian media. DPNE’s Mickoski has vowed many SDS politicians will end up in prison for their corruption and stealing taxpayers money… that will be the day.