CIA’s operation to erase Macedonia as a state and people will conclude with the country’s presidential elections – writes former MIA journalist Boban Nonkovic.

What started in 1913, it ought to be completed in 2019, despite huge foreign efforts and meddling in Macedonian Parliament which will change the name of the country in the coming days, however, all the illegal and criminal acts brought in by the Assembly will be legalized by the signature of a new puppet president. And the US Deep State wants Zaev, for reasons explained below, writes Nonkovic for portal Dudinka.

The operation is simple.
Zaev, together with Radmila Sekerinska and Nikola Dimitrov, are the main players who completely and most extensively performed the dirty operation of the American deep state (CIA structures) for the dismemberment of Macedonia and the Macedonian people. As a result, the CIA does not want to easily give up on their assets in Macedonia, at least not the same way they gave up on corrupt Macedonian judges and the illegal SPO. The CIA wants safe exits, i.e. “golden parachutes” similar to the parachutes that were provided to Nikola Gruevski and Sasho Mijalkov – writes Nonkovic.

Nikola Dimitrov, who has been revealed as a CIA operative (surprising no one in the process), the Deep State is already planning to reward him with inserting him in a senior high position at the United Nations – three locations are being looked at, New York, Geneva and the Hague where Dimitrov’s family currently resides and owns an apartment.

CIA’s other asset in Macedonia, Radmila Sekerinska, meanwhile, has already received militaristic training and after starting the integration process (read: kidnapping) of Macedonia into NATO, she will be sent to work in a position at NATO’s headquarters in Brussels, likely to be the head of the gender equality department currently led by another CIA agent Mariet Schuurman, better known as the ex-ambassador of the Netherlands to Macedonia. Schuurman was also part of Zaev’s so called “umbrella”.

Both Dimitrov and Sekerinska are favorites among the CIA because of their “international” appeal, speak foreign languages and can adopt at any institutions.

Thus, the only problem is Zaev.

With Zaev, the CIA structures have a problem to provide a golden parachute due to his very low intelligence, inability to speak a foreign language which somehow includes his mother tongue. His intellectual dyslexia makes it impossible for him to be installed on a position in an international organization in a foreign country, therefore, the only reliable safe exit for him is to be installed as a president of Macedonia, which will give him five years of quiet life in the white palace of Vodno and enough time for the Deep State to think of something else.

During these developments, the VMRO-DPMNE (more precisely those who led it and still do) which carefully sells itself as opposition, is very much part of the name change operation. What it is not, is a structure that supposedly opposes the name change and stands with the people. In fact, the best proof of this is September 30th this year, when even though most of the membership, even party structures and branches, were determined and worked on a boycott of the referendum, their party leader Mickoski was silent until it became evident that 70% of Macedonian citizens boycotted the Referendum. Mickoski originally asked citizens to vote in the Referendum.

VMRO-DPMNE is riddled with CIA and deep state assets. Not to mention, again, the ridiculous situations with their MPs in Parliament, who when everyone asked of them to leave, they stayed, when they were asked to stay, they left – each and every time serving the needs of Baily’s fascist junta. Such is the case with Deep State asset Aleksandar Nikoloski (you know, the kid tied to UK intel who provides support for renegade MPs by meeting secretly with AVMU’s Zoran Trajcevski)!

In fact, VMRO-DPMNE party president Hristijan Mickoski is still an enigma how he arrived at the helm of the party, after his mentor and financier Sasho Mijalkov (known as the father of the renegade 8 MPs) allegedly is no longer with him! Yet, Mickoski has enough money from a Hungarian media-marketing company to manage and finance not just his party, but several newsportals in the capital (“Alfa”, “Kurir”, “Denesen” etc.), as well as regular servicing and functioning of party activities and real estate. Of course, just as it happened Hungary is also the country where Gruevski has transferred his fortunes, supposedly just a day before he moved there.

Meanwhile, similarly to the Referendum fiasco, yes this was a fiasco for the VMRO-DPMNE, the party is choosing a supposed candidate for president. Former mayor of Skopje, Koce Trajanovski, retired professor Savo Klimovski and professor Tanja Karakamisheva appear to be the options. Considering the party is severely shaken up, which is what happens when you purposely go against the will of the people, the first two candidates are ‘spotters’ for Zaev. Massive electoral fraud is now the norm with Hahn openly encouraging Zaev to commit fraud even during the Referendum – “Do your Balkan things to ensure success”, thus the individuals pushed forward by VMRO-DPMNE will allow the party to wash their hands and claim the party membership decided on Klimovski/Trajanovski. It’s the same thing Mickoski tried to pull for the Referendum where the party leadership sincerely wished for the Referendum to succeed. 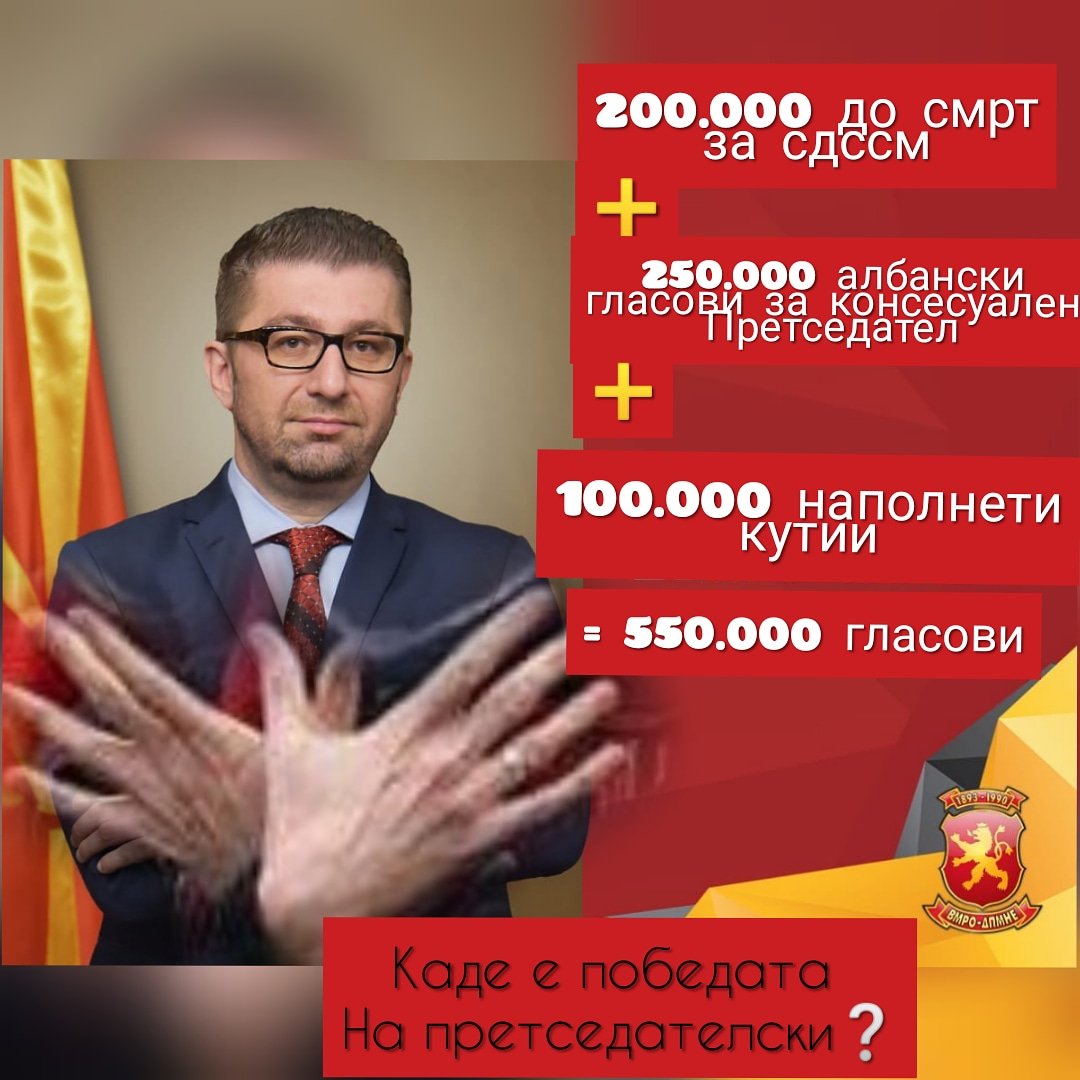 Only professor Tanja Karakamisheva fits the mold for a president out of the three candidates. She has shown she is a fighter for Macedonia since day one and will undoubtedly bring the country together and defeat CIA’s candidate.

Should VMRO-DPMNE put the same party engineering in motion, the one that ‘elected’ Mickoski as the head of VMRO-DPMNE, then the chances for the junta electing Zaev for president is very high.
The entire CIA operation in Macedonia is led by SDSM, DUI, BESA, AA and VMRO-DPMNE. It’s really been VMRO’s membership, the common people, who were wise enough early on to see what VMRO-DPMNE’s leadership is up to. Namely, there is reason why EU’s Hahn publicly thanked Mickoski for not just preventing the process of accepting the Prespa Agreement in Parliament, but for supporting it. This is all you need to know.

Why is Mickoski doing this? Because the CIA promised him he will be the first prime minister of a zombie, nameless, economically ruined country.