The steady growth of anti-NATO sentiment in Turkey gained momentum following the recent scandal that erupted during the military alliance’s exercises in Norway last week. The negative trend was reflected in the opinion poll, conducted by the research company İstanbul Ekonomi Araştırma (IEA), in early November.
The majority of the Turkish population, namely 67 percent, believes that the country’s security can be ensured without its membership in NATO, according to a recent survey. 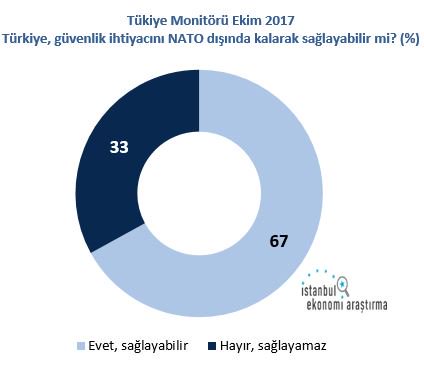 The poll was carried out by İstanbul Ekonomi Araştırma (IEA) in 12 Turkish cities in the first half of November, two weeks before President Erdogan’s top aid reportedly advised parliament to reconsider Ankara’s membership in the alliance.

Relations between Turkey and its NATO allies took a turn for the worse amid Ankara’s active cooperation with Moscow and Tehran on the settlement of the Syrian crisis as well as the Turkey-Russia agreement on the purchase of Russian S-400 air defense systems.

Meanwhile, the survey has shown that over 70 percent of respondents supported Turkey’s cooperation with Russia in the field of politics, economy and security.

​The ties between the military alliance and Ankara deteriorated even further last week following Ankara’s decision to withdraw 40 Turkish soldiers from NATO exercises in Norway, where Turkish President Recep Tayyip Erdogan and modern Turkey’s founding father Mustafa Ataturk were pictured on a “chart of enemies.”

Even after the military alliance’s leadership apologized to the Turkish president and dismissed a Norwegian soldier who was found to be responsible for the incident, Erdogan announced that Ankara wouldn’t change its mind and renewed its participation in the drills.

Italy faced with another lockdown