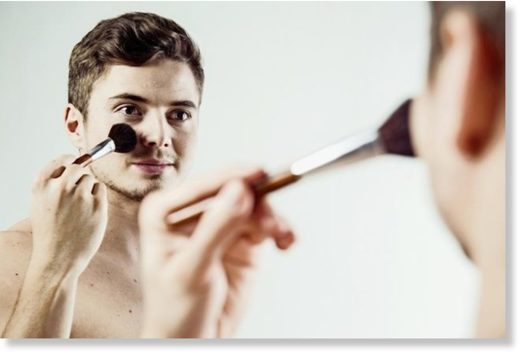 Male make-up counters could become a reality within five years, the UK boss of L’Oreal has said, as it is no longer a taboo for the “selfie generation”.

In an interview with the Daily Telegraph, Vismay Sharma, the cosmetics giant’s UK managing director, said that demand for make-up among men was growing fast.

Speaking about the industry as a whole, he said male-targeted counters in department stores and drug stores could be a reality in “five to seven years”.

According to Mr Sharma taboos are changing and make-up is becoming more accepted for men among what he describes as the “selfie generation”.

He said: “Today you have a very small proportion of men who want to use make up products but that proportion is growing and it will continue to grow. I think its just awareness – two things are happening, men know they can use make up, and they know what it does when you use it.

“Is the trend going to go towards bold colours or more subtle? I don’t know. But what I do know is we are listening very carefully to consumers and what they want.”

It comes after online retailer ASOS this week launched a male-only beauty range from MMUK, which includes a concealer, beard and brow filler and mascara.

Co-founder Alex Dalley said: “We hope that this move places make-up for men on the radars of thousands of guys out there who simply want to look their best everyday.”

And at the higher end of the market fashion titan Tom Ford has also launched a small collection of male grooming products including an eyebrow maintenance kit and a concealer set. The brand’s “Brow Gelcomb” is reported to have rocketed in sales, showing it clientele feel the need to keep their “over-eye caterpillars” well-tended.

To cater to the growing demand for men’s cosmetics, make-up artists who usually cater for women’s only customer bases are starting to post tutorials on their websites specifically for men to provide them with tips and tricks.

Make-up mogul Charlotte Tilbury’s website reads: “I get so many requests from men asking how they too can benefit from the power of skincare and make-up products.” Describing a video on her site, she said: “This is a masculine approach to beauty – helping you to look and feel revived after a late night or a long winter, for a job interview or date, or when you just need a skin pick-me-up.”

It is the first time that men and teenage boys are being offered a dedicated range of concealers and foundations to subtly improve their appearance and boost confidence. The male make-up revolution also offers more accessible solutions for men suffering from spots and skin conditions to cover their blemishes without resorting to using “women’s” products.

And as make-up trends evolve, men could also see bolder forms of make-up such as eyeliner and eyeshadow included in mainstream cosmetics offerings.

Featuring in L’Oreal’s True Match Foundation advert alongside celebrities including Cheryl Fernandez-Versini, Gary talks about finally being true to himself and embracing who he is. At the time he said: “I think we’ve come far with accepting men wearing makeup.

China issues 50th PR how it doesn’t like Crypto, but the Chinese love it