Russian football stars Aleksandr Kokorin and Pavel Mamaev have been handed prison sentences of a combined 35 months after a Moscow court found them guilty of hooliganism in two assaults last year. 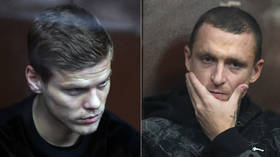 On Wednesday the pair were declared guilty of causing intentional injury in two violent attacks in Moscow after a drunken night spent partying in October following a Russian Premier League between the players’ two teams, Zenit St. Petersburg and Krasnodar.

“The court has found that Aleksandr Kokorin, Kirill Kokorin (the footballer’s brother) and Pavel Mamaev intentionally inflicted injuries to the victims being driven by hooligan motives,” said judge Elena Abramova.

The pair were detained last autumn in the wake of two separate incidents which left two people seriously injured in Russian capital.

Kokorin and Mamaev were accused of initiating a brawl in a cafe during which they insulted a government official, and after which Kokorin hit him over the head with a chair.

The same day the footballers were caught on camera assaulting a second man, a driver for a Russian TV presenter, leaving him with brain damage as a result of a series of blows to the head.

The high-profile case has been followed closely by Russian football fans and broader society, involving as it does two players who have both represented their country.
Kokorin, 28, has made 48 appearances for the national team, while Mamaev, 30, has made 15 appearances – the last coming in 2016.

The Russian Football Union has said the pair have “no relationship” with the national team, while their club careers remain the subject of huge debate.

Historian asks: What Race were the ‘Greeks’ and Romans?

DPNE pleads with Macedonians to protest, after ignoring them earlier