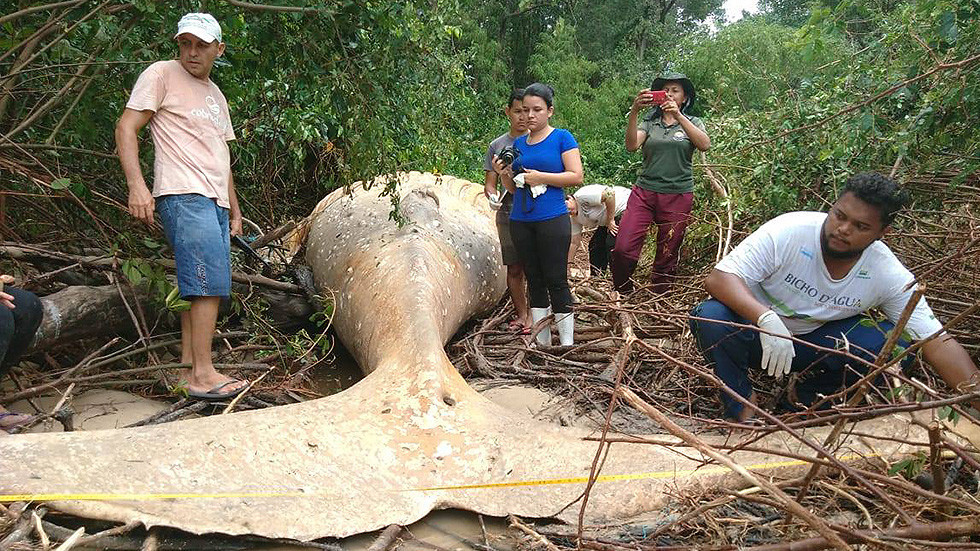 Locals made a grim discovery on the banks of the Amazon river in Brazil Friday, drawn to the grisly scene by masses of circling vultures overhead. In a clearing roughly 15 meters inland, they discovered a dead humpback whale calf.

Biologists from the NGO Bicho D’agua rushed to the scene to investigate the whale’s death before the vultures could mutilate the carcass further. However, when they arrived at the scene, the animal didn’t appear to have any wounds.

The marine mammal washed ashore during the Amazonian winter, when freshwater river flooding is widespread, which made the find all the more mysterious as whales typically only enter the Amazon Basin in summer when saltwater penetrates the vast system of rivers.

The roughly eight-meter-long, one-year-old calf was likely separated from its mother, and unfortunately became entangled in mangroves before being dragged ashore by high waves. The researchers took samples from the carcass to determine the cause of death. Calves can weigh up to 1.5 tons so the creature’s body will likely be left in-situ for the carrion to dispose of naturally.

“We only found the whale because of the presence of scavenging birds of prey. The vultures were spotted circling above the carcass which was found hidden in the bush some distance from the sea,” Darlene Silva from the Department of Health, Sanitation and Environment told Jornal O Liberal.

Pandev takes a pay cut to stay at Genoa