An explosion rocked downtown Ohrid last night which resulted in the damage of the vehicle belonging to Mishel Naumoski – an attorney and a senior party official of “VMRO-DPMNE” in Ohrid.

Fortunately, no one was injured in the incident that took place in the center of the city, but Naumoski’s family is very upset as this is the fourth time since the SDSM came to power an incident has occurred, all of them tied to local SDSM rivals who become increasingly violent each time. 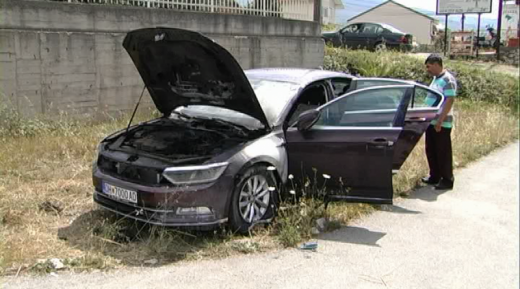 Naumovski is a member of the Municipal Committee of VMRO-DPMNE. He was a serious candidate for the president of the Ohrid branch, and his name was also linked to the director’s position for Ohrid’s correctional facility.

Naumovski says the security cameras captured two people near the car moments before it exploded. He is certain he was followed home, as the explosion occurred 10 minutes after he entered his home.

Police has not resolved any of the violent incidents against Naumovski and his family.
DPMNE officials continue to reap the rewards after Gruevski gave up his PM post…