Fort McMurray, Alberta has officially turned into “the insolvency capital of Canada”, according to Bloomberg.

The small oil town’s problems are exemplified by the number of people who show up every month at the Wood Buffalo Food Bank. A decade ago, the bank would see about 2,000 people per month, coming by for cans of soup and jars of peanut butter. Now, that number stands closer to 8,000 people per month. Many that come by now are men and women who were “living high before the bust.”

The Food Bank’s director, Dan Edwards, said: “You never know who’s going to walk through your door. Individuals that have degrees and education and skills—but the jobs just aren’t what they were.”

The tiny city of just 75,000 exemplifies the debt problems that are spreading across Canada. As large paychecks and robust overtime have dried up, the bill for many consumers’ spending over the last decade has finally come due.

In the Fort McMurray district, consumer insolvency filings were up 39% in 2018, the largest increase in Canada. Claims against property have been up about tenfold in the last three years. The 90 day delinquency rate on non-mortgage loans in the city is up 1.75% in the second quarter, compared to 1.12% nationally. 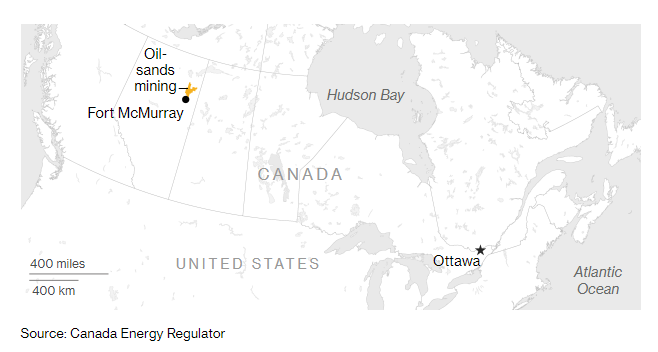 The main driver of the bust has been the five year slump in oil prices, which have halved since 2014. Exacerbating things was a “crippling shortage” of pipelines out of the McMurray Formation, a reserve of crude-laden oil sands. Plans for new lines have been held up in court or by activists, including U.S. activists who have called the oil sands a “carbon bomb”.

The energy industry continues to be a key part of Canada’s upcoming federal election. Conservatives argue they are champions of the sector and argue they will undo many regulations implemented by Prime Minister Justin Trudeau. Liberals are working to try and strike a balance between developing the industry, while committing to combating climate change.

Steve Richardson is a prime example of the area. After working at Suncorp for 5 years, he was let go in May. He had formerly earned 6 figures as a machine operator and would commute from Vancouver, working 14 days on and then 7 days off. Once travel reimbursements stopped, he moved his family closer to the job. But now, he’s being forced to cut back across the board – including cutting things like his cable bill.

Richardson said: “I spend a lot of time wondering what the next job is going to be. I never got into all the toys. I’m kind of fortunate that way, that I didn’t have to sell everything off like some other people. I’ve seen a lot of that. It’s like a fire sale.”

The potential in the area remains immense.

The Alberta oil sands are the third largest proven reserve in the world, only behind Venezuela and Saudi Arabia. Bloomberg notes that “As oil prices were climbing from 2004 to 2014, the industry invested C$210.1 billion ($157.7 billion), more than last year’s combined total capital spending by all of the companies in the Dow Jones Industrial Average.”

Output over those 10 years doubled and Canada became the world’s fifth largest oil producer, up from eighth.

During the boom, the city’s population doubled, tax revenue helped revamp the airport and schools, and median household incomes more than doubled between 2001 and 2011, to about C$181,000.

When oil tanked, plans stalled, companies like Shell and ConocoPhillips sold their oil-sand assets and capital investments declined. Capital investments are currently on track to decline for a fifth straight year to about C$12 billion, down by about 66% since 2014.

To make matters far worse, when oil was at $26, a wildfire swept through the area and forced the evacuation of more than 80,000 people. It caused about $3.7 billion in insured losses.

Don Scott, mayor of the Regional Municipality of Wood Buffalo said: “The housing market is down, there’s the economic downturn and there’s still the recovery from the fire.”