It’s not like we didn’t know. Here is legendary Sci-Fi film director Stanley Kubrick admitting in 1999 he filmed the “Moon landing” in a studio. Kubrick was dead two months after this interview.

Below is Kubrick meeting secretly with NASA officials in England. What makes the entire thing ‘hilarious’ is that Kubrick hinted he faked the moon landing in numerous movies, but one where he made it too obvious is “The Shining”. After the AstroNots returned, Neil Armstrong became a major alcoholic, a recluse and quickly divorced his wife, while Buzz Aldrin turned into a complete psycho, punched people who asked him to swear on a Bible he landed on the moon. No they didn’t, but they did land in a large California studio.

The three original astronots who were training for years and were chosen to fake the trip to the Moon became ‘trouble’ for NASA after Grissom on his own initiative called a press conference in which he stated the rocket had zero chance to go anywhere, calling it a “lemon”. He even hanged a lemon on the module to essentially mark it as a trash can.

This bad publicity was very disturbing to NASA who apparently waited too long to tell them they’d fake the trip to the Moon. Grissom, White and Chaffee soon after had a little training ‘accident’ in which all three were burned alive in a capsule. NASA’s fire trucks showed up half an hour later after all three were confirmed dead.

The original trio were replaced by Armstrong, Aldrin and Co. No training required or a working rocket needed… they just went to the Moon.

Stanley Kubrick explains it all well in his last interview. 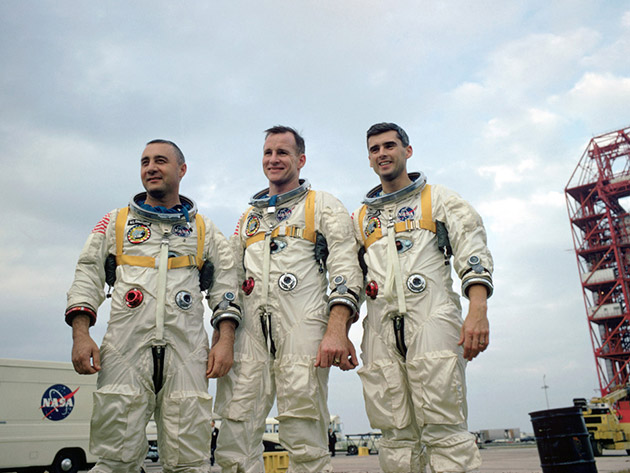