The Vice President of “United Macedonia” Stefan Vlahov Micov has just poured gasoline and lit a match on his own political party. The alleged patriotic party was founded, and is  financed by the US Embassy using Zaev and his junta as its intermediary, confessed Micov today.

In a post on his personal FB page, Micov says:

It is abnormal in a Christian Orthodox state like Macedonia, all existing parties, and I mean all of them to be oriented towards the West, although much of the population wants closer friendship with Russia. That is why I accepted to be deputy chairman of the rebranded party under a firm condition: to have a major say in the strategy of the party. I wrote the party program (the section for the Eurasian Union was prepared by another colleague), which was divided into thousands of copies throughout Macedonia – writes Micov.

The president of United Macedonia, Janko Bacev, surprised me when he suggested that our party logo should resemble that of Putin’s political party “United Russia”. I saw no reason for it. In the end we settled for our Macedonian 16 ray sun, the lion and the red color. 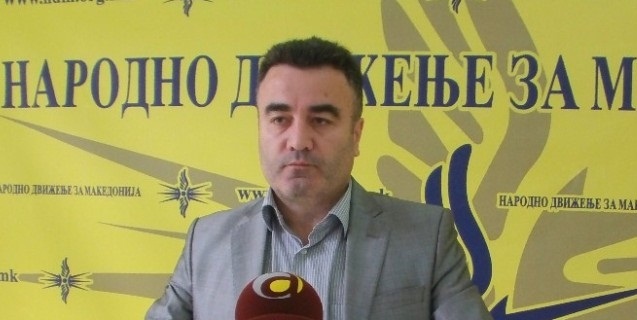 In a very short amount of time, we ended up bringing in influential Russians such as Savin and Dugin to Macedonia. In April we went to Moscow. In Macedonia we created 62 offices. What brought my attention and a few red flags is our rapid development and the fact none of the SDSM-run newspapers, or CIA run Voice of America, DW… wrote anything negative about us, but the papers that I didn’t think would write anything negative about us, wrote a lot of negative thinks – not realizing that they knew who is behind this political party – says Micov.

BEHIND THE SCENES – Whole Project Run by the US Embassy

In essence, the idea of creating a “pro-Russian” party in Macedonia was 100% initiated and run by the US Embassy while Zaev’s junta were the intermediary, the point of contact between them and Bachev. The sole purpose and goal was to portray Russian influence in the country and thereby increase Western pressure for the country to be swallowed by NATO as well as speed up the genocide against the Macedonian people and the demolition of the Macedonian state.

Editor Note: Just yesterday we wrote of the UK doing the same thing in Macedonia, creating fake opposition run by them.

I applaud Mickoski who very early stated that Janko Bacev works for Zaev. Now of course, we all know that Bachev and Zaev are in constant communication – continued Micov.

Other red flags kept popping up after Janko Bacev stated “United Macedonia” is an extended hand of the Russian Government. What the hell!? Now, we all know that his statements were ordered from someone else, think of a flag with stripes and stars – says Micov.
The Russians very quickly saw through Janko Bachev, describing him as first and foremost “Anti Macedonian” and certainly not a “Russophile” – says Micov.

In the end, Micov says that Bachev is yet another traitor in the long list of traitors to Macedonia.

Today Micov announced he is quitting the party and wants nothing to do with a US Embassy run political party/project.
Has anyone noticed the speed with which American activities in the country are crumbling left and right?

Macedonia’s beggars get another donation – 13 police cars from Czechia