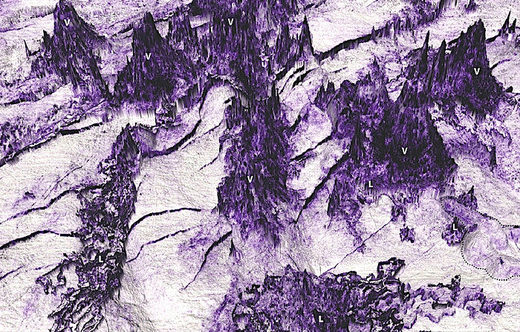 Today in news best suited for sneaky little Hobbitses and Shire-folk, scientists unveiled a map of a faraway volcanic realm that has a distinct look of Mordor about it. Unfortunately for any ring bearers, the molten landscape has probably been hidden underwater for millions of years.

The team employed 3D seismic reflection, a geo-mapping technique that uses seismic waves to measure subsurface structures. With this technology, the researchers identified 26 separate volcanoes buried roughly 820 feet (250 meters) beneath seabed sediment. Some of the ancient volcanoes reach up to 2,000 feet (625 m) in height and are surrounded by several lava features never before studied underwater, the study said.

“The technology we have used is similar in many ways to what is used to produce ultrasound images of babies, but for the Earth,” study author Nick Schofield, a senior lecturer at the University of Aberdeen’s School of Geosciences, said in a statement released Wednesday (Jan. 17). “By using this technique, we have a unique insight into a landscape that has remained hidden for millions of years.”

In the study, which was published in the November 2017 edition of the American Geophysical Union’s journal Geochemistry, Geophysics, Geosystems, researchers dated the volcanoes to the Eocene epoch, which took place roughly 50 million to 33 million years ago. The network of remarkable lava flows surrounding the volcanoes – known collectively as the Bight Basin Igneous Complex – was likely created during an undersea eruption roughly 35 million years ago, the study said.

“By using data acquired as part of oil-exploration efforts, we have been able to map these ancient lava flows in unprecedented detail,” Schofield said. From this seismic data, the researchers determined that some of the ancient lava flows measure more than 21 miles (34 kilometers) long and 9 miles (15 km) wide.

Across these miles of terrain, the flows branch into pathways, rise into plateaus, plunge into trenches and spread into elliptical-shaped “islands” of hardened lava. Researchers compared these islands to land-based lava features known as “kipukas,” isolated hills or plots of slightly elevated land that become completely encircled by lava after eruptions. Features like these have never been described by underwater seismic data before, the study said, so this new study gives researchers a fresh look at the behavior of submarine eruptions.

US gets coronavirus outbreak at an Aircraft Carrier