On February 8th, the deputy commander of the operational command of the Donetsk People’s Republic, Eduard Basurin, announced that American instructors have been sighted arriving in Donbass. According to Basurin, the American officers were accompanied by representatives of the Ukrainian Armed Forces’ General Staff, and intend to direct Ukrainian troops to prepare them for an offensive. 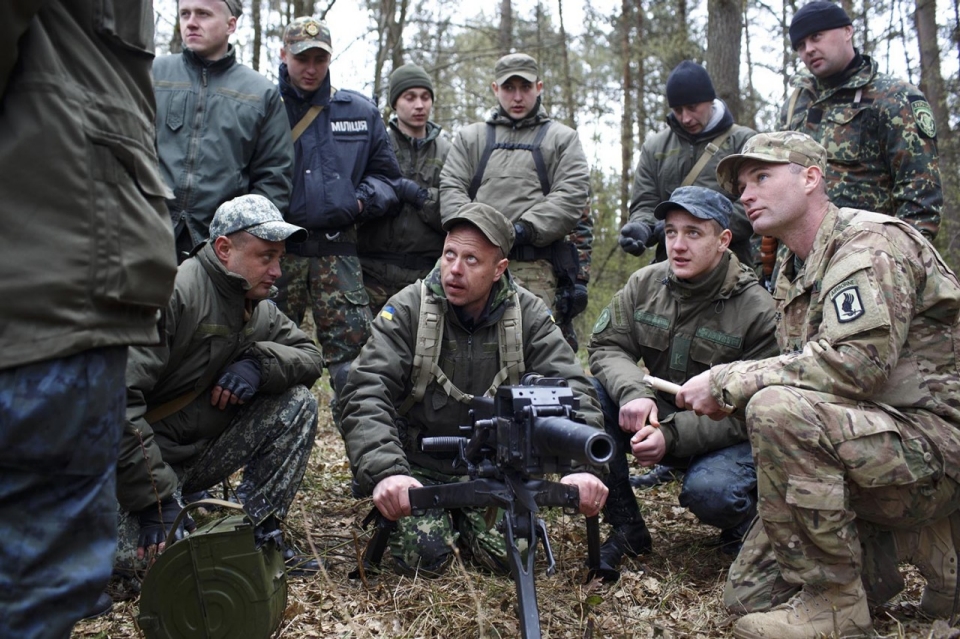 The American officers are said to be paying particular attention to the Ukrainian “Donetsk” operational-tactical group, and Basurin has additionally claimed that US officers have ordered Ukrainian troops to remove Right Sector militants from the frontline. The significance of this will be discussed below.

To recall, American military personnel are not the only NATO army representatives in Donbass. Canada, for instance, has just sent 200 military instructors to Ukraine who were rotated out in 2017, but are now back to deployment until 2019. According to intelligence reports of the Lugansk People’s Republic, Canadian instructors are also operating in Donbass and even carrying out special tasks for the Ukrainian Armed Forces. Back on February 4th, DPR command representatives also announced that instructors from the UK had been sighted arriving on Kiev-controlled territory in Donbass. Basurin himself, citing intelligence reports, stated that the foreign specialists have come to train Ukrainian saboteur groups.

Overall, as the DPR has reported before, nearly 900 foreign instructors are working with the Ukrainian army in Donbass.

The arrival of American inspectors and Canadian and British officers, including specialists in saboteur training, is alarming – especially since, coincidentally or not, these “reinforcements” have appeared at the same time as Ukrainian social networks have leaked Ukrainian General Staff plans for an offensive in Donbass.

In the first days of February, bits of information surfaced across social networks alleging possible plans by Kiev to launch an assault on Donbass. In particular, the “leaked” plans envision the creation of two army groups which would simultaneously assault Donetsk and Lugansk. The operation is to be completed in the course of a month.

This information has been confirmed by DPR intelligence, which has gained access to classified maps that suggest that the UAF is planning to go on an offensive this spring. Eduard Basurin presented these materials at a briefing on February 6th, and suggested that the main thrust of the enemy would be to strike to the North and South of Donetsk.

The result of such offensive operations, according to Kiev’s calculations, would be the defeat of the republic’s defense forces and a successful march up to the border with Russia.

It is impossible to rule out that these leaked plans are but a disinformation move by the Ukrainian side. Nevertheless, multiple points suggests that this plan is indeed genuine. Numerous experts seem to agree. Let’s go through the evidence.

Two main circumstances speak in favor of the plan being genuine: heightened UAF preparations for war coupled with US aid, and the effective work of the Donbass republics’ intelligence in Ukrainian military circles. The DPR and LPR have a significant network of agents in Ukrainian military units and, quite possibly, even in the Ukrainian Army’s General Staff. But the Ukrainian side also has agents entrenched in firm positions throughout the military and civil institutions of the Donbass republics.

As second possible explanation for the plan’s publication could be that such was the result of a specially organized leak. According to some indirect sources, the Ukrainian General Staff harbors strong sentiments against resuming the war, as such would threaten the Ukrainian Army with final destruction. Perhaps the publication of such top-secret documents revealing the aims and timing of a UAF offensive was a move by officers who hope to prevent or at least postpone the onset of war.

Moreover, it is hard not to see a telling coincidence between the leaked plans of a Ukrainian blitzkrieg and the arrival of American officers at forward UAF positions. If this plan is real, then one has to agree with Basurin that these American officers are inspecting the state of UAF units in the zone of impending battles in preparation for a strategic offensive.

Basurin’s statement also contained a rather peculiar remark: the Americans have evidently recommended (or demanded?) that Right Sector militants be removed from the frontline. Russian media reports have explained this instance as a necessity conditioned by the Ukrainian command’s lack of ability to control Ukrainian Nazi units. In my opinion, however, the motive here is different. As commanders of the LPR army confided in me last June, Ukrainian Nazi fighters are highly motivated to kill, but poorly trained militarily. They are punitive gangs resembling a Ukrainian analogue of the SS Sonderkommando, not a regular army.

I surmise that Ukrainian Nazi battalions are being kept back in order to be used after a possible offensive – if such succeeds – to carry out the “cleansing” of the Donbass republics and establish a reign of terror. In other words, these “punishers” will be used for their intended purpose, for which UAF units are much less suitable. Already during the first months of the war in Donbass, we might recall, numerous reports recorded fights that broke out between UAF units and the Nazis over the latter’s terrorism against civilians.

The news that Right Sector is being withdrawn from the frontline suggests, albeit indirectly, that the UAF is indeed preparing for an offensive, and is moving its units around accordingly. All the forces at the disposal of the Ukrainian command will be thrown into an assault on the Donbass republics. First will go regular soldiers, and then the Nazi battalion fanatics. It is otherwise difficult to explain the American suggestion to remove Right Sector from the frontline, as their presence never seemed to disturb the ATO command before.

Another important aspect of American officers’ operations in the ATO concerns the problem of US military assistance to UAF units and Nazi groups (Azov) being stolen. This problem is unsolvable, as such would require changing the very nature of the kleptocratic Ukrainian state and military leadership. But the scale of this theft might be able to be reduced, hence US officers inspecting sites themselves.

After all, the US will not stop or even reduce the flow of material, technological, and financial aid to the Ukrainian Armed Forces despite the obvious expenses. But they can try to reduce such to a minimum with more effective assessment of the state of affairs in the Ukrainian rear. Hence the presence of American “auditors.”

Now let us summarize. The arrival of American military inspectors and NATO specialists in the ATO zone, the leaking of a document supposed to include plans for a Ukrainian offensive on Donbass, and the recommended rotation of Nazi battalions from the frontline all suggest a dramatic increase in the likelihood of a full-scale Ukrainian offensive operation.

This is further confirmed by our repeated forecast that war should be expected closer to the Russian presidential elections. Indeed, if the leaked UAF plan is real, the timing of an offensive – ambiguous as it might be stated – is spring of this year. Regardless, the situation is clear: over the next few weeks and even months, especially with presidential elections around the corner, Russia will be in a vulnerable situation that could complicate military-political and diplomatic activities. Perhaps this is what those devising a new war in Donbass want – to drag Russia into a new, full-scale conflict.

DPNE Clowns will take action: Complain in Strasbourg over freezing of properties