Apostolov answering questions before he was hanged

On January 22nd, in 1945, the people’s Court in Kavadarci announced the death penalties for colonel Ljuben Apostolov, in charge of the 56th brigade of the Bulgarian Army, captain Boris Zeglov and lieutenant Petko Oprekov. Apostolov was Macedonian traitor who fled to Bulgaria after the Bulgarian Army was beat back in WW2, however was extradited back to Macedonia in 1945. The rest of the extradited were Bulgarian officers.

Apostolov led the 1943 week long “South offensive” and was directly responsible for the execution of 12 Macedonian students in Vatasha on June 16th, 1943. The ironic twist is subordinates within the Bulgarian Army tried to persuade Apostolov (hailing from Kriva Palanka) not to execute the Macedonian youth telling him it would only outrage locals and swell the number of partisans. Apostolov still did it. Macedonia, always suffering from the hand of Macedonians! 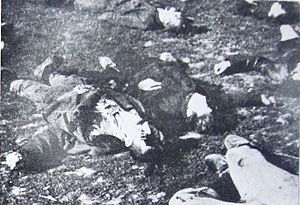 The People’s Court in Kavadarci debated and delivered the death sentences to all parties involved within minutes. Traitor Apostolov and the rest of the Bulgarian officers were publicly hanged. The Court decided they needed to suffer for as long as possible before they were put to death, therefore execution by a firing squad was out of the question.

This is how a Macedonian people’s Court in 1945 handled traitors and enemies both domestic and foreign.

Today Macedonia has capitulated on every front. It has neither Government, judiciary or Courts, yet we still wonder what would the same Kavadarci People’s Court do today with the traitors who are selling our name, identity, history, language, and independence to the highest bidder?