Zaev’s Rent-a-people campaign model suffered quite a setback today as he started his “For” name change campaign in Kochani.
Two buses and four vans showed up in Kochani, which resulted in this attendance: 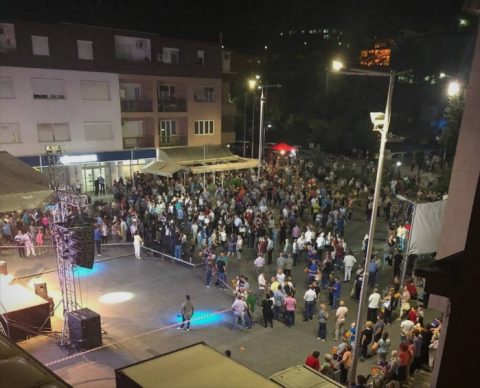 Fearing a replica scenario in Shtip, Zaev rented two more buses and two additional vans for his campaign in Shtip. The buses came from Strumica and Makedonski Brod. If in Kochani roughly 150-200 people showed up, with the two additional buses, Shtip saw an attendance of 300 people.

Zaev promised his rent-a-people who already heard his speech in Kochani, even better days ahead in Shtip.

“We have made a quantum leap to EU and NATO. Nobody in the future can question or prevent us from our right to self identification. With our agreement with Greece, we have closed this question for now and forever” Zaev told his crowd.
Meanwhile, Dimitrov in an interview with IBNA in Vienna confirmed the Macedonian quisling Government has given up the right to not just the name, language and identity, but virtually any and all history. Zaev’s rent-a-people are now heading to Valandovo and Dojran where the SDS leader is continuing his campaign for name change.