Greek Prime Minister Alexis Tsipras said the negotiation process is approaching the end and that the solution to the name should be erga omnes after today’s meeting with Macedonian Prime Minister Zoran Zaev at the Davos World Economic Forum. Zaev, at a joint press conference, announced that the government will change the name of Skopje’s international airport (Alexander the Great) and the country’s main highway to “Friendship”, Zaev said. 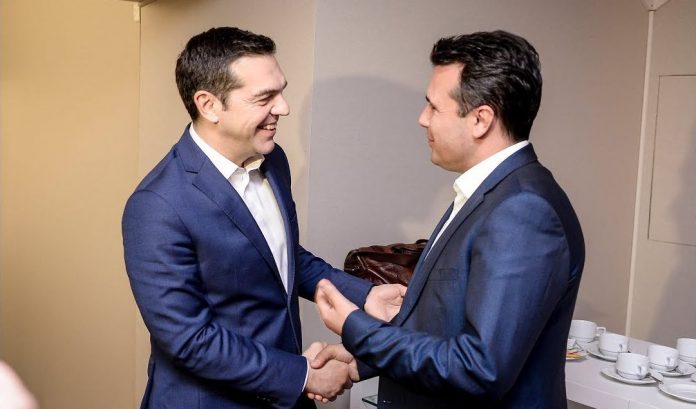 “We are a new generation of progressive prime ministers. I know that today many people are watching us. Some with skepticism, others with optimism. We want to solve the issues pragmatically and responsibly. I am saying this because we do not just want to resolve the name dispute, but also to establish bilateral relations on the basis of mutual trust. Let’s deal with all forms of irredentism, let us not leave loopholes to make sure that similar challenges will not arise in the future. We must find a solution to all the unresolved issues so that the Euro-Atlantic integration can continue. The joint solution should be erga omnes, and the negotiation process is approaching the end. We agreed in parallel that confidence-building measures should continue, “Tsipras said.

Zaev stated: “The two countries are on the right track to achieve good neighborly relations that will contribute to the stability and economic prosperity of the Balkan region. The majority of citizens in both countries want to have close and friendly relations. We want to become equal partners in the EU and NATO. We have shown in the past that we can work together for mutual interest. As prime ministers, we have a political vision and responsibility to work to overcome the longstanding dispute. It is a slim time to find a solution because it is crucial to our Euro-Atlantic perspectives. The ultimate solution must be acceptable to both parties. The solution must be to protect the national dignity and identity of our peoples. To show that we are committed to finding a solution, the government have already made plans to change the name of the airport and the highway. The highway will be called “Friendship”. This testifies to the fact that we have no territorial claims against our neighbor. We remain committed to the negotiating process led by UN mediator Matthew Nimetz. We will raise the level of negotiations of foreign ministers with their teams. This will allow for greater dynamics and essence “