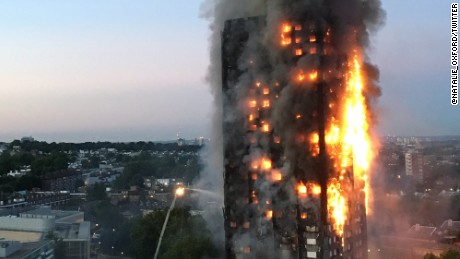 A baby was caught by a member of the public after being dropped from a window as fire engulfed London’s Grenfell Tower, a witness has said.

Samira Lamrani said she saw a woman gesturing to the crowd below that she was about to drop her baby from “the ninth or 10th floor” of the building.

A man ran forward and managed to catch the baby, she said.

Twelve people have died in the blaze in north Kensington and police expect the numbers to rise.

Ms Lamrani told the Press Association: “People were starting to appear at the windows, frantically banging and screaming.

“The windows were slightly ajar – a woman was gesturing that she was about to throw her baby and if somebody could catch her baby.

“Somebody did, a gentleman ran forward and managed to grab the baby.

She described seeing people “from all angles, banging and screaming for help” from the tower block.

“We were reassuring them, telling them we’ve done what we can and that we’ve phoned 999, but obviously the look on their face was death.”

She said one resident attempted to use a “homemade parachute” to lower himself out of a window.

Ms Lamrani said there were “endless numbers of people” trapped in the building, including children, and she could hear them “screaming for their lives”.