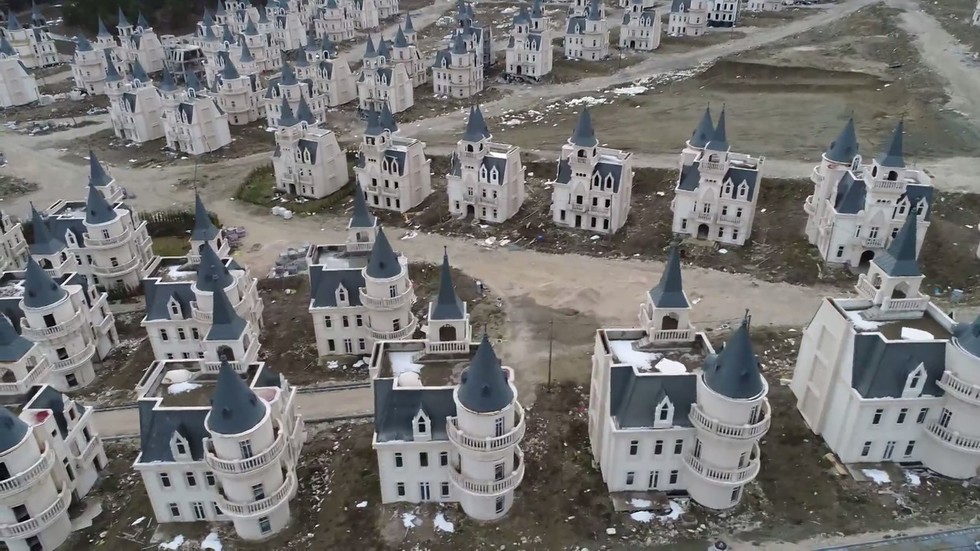 Hundreds of chateaux, seemingly plucked out of a Disney fairy tale, can be seen in aerial footage shot by the Ruptly video agency. Intended as a luxury housing complex for wealthy Arabs in western Turkey, it now sits empty.

A dystopian town sits just three kilometers from the historic town of Mudurnu in Turkey’s northwestern Bolo province. The peculiar design of identical miniature castles was tailored to the taste of mainly Arab investors of the Burj Al Babas project. The project, developed by the Sarot Group, also included a shopping mall, a hotel, a mosque and famous Turkish baths.

Hundreds of Disney-like chateaux have been abandoned at the Burj Al Babas Villa luxury housing complex located near Mudurnu in Turkey’s northwestern Bolo province © Ruptly
Despite vocal protests of the locals, who argued that the Disney-style villas do not match the Ottoman architecture and would ruin “the historic fabric” of the province, it was given the green light by authorities, with construction launched in 2011.

However, out of the initially planned 732 villas, only 587 were completed before the company ran into financial troubles, incurring $27 million in debt. Roughly half of the villas have been sold to buyers from Qatar, Bahrain, Kuwait, United Arab Emirates and Saudi Arabia.

The chairman of the company blamed the group’s financial woes on the customers, who have yet to transfer the money.

The Sarot Group unsuccessfully sought to restructure the debt and was declared bankrupt in September. Yerdelen, however, vows to fight for the controversial project.