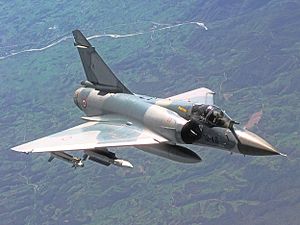 Greek authorities say an air force pilot has been rescued after his fighter jet crashed during a training flight into the Aegean Sea.

The jet was one of a pair of aging Mirage 2000s engaged in aerial combat training south of the Sporades island complex Monday. An air force statement said the plane developed engine problems, forcing the pilot to eject.

The statement said he was later picked up by a military search and rescue helicopter.