An association of parents petitioned Parliament to amend the law on healthcare and to make vaccination optional. The parents say that they are not anti-vaxxers, but are concerned about the quality and safety of vaccines available in Macedonia.

We demand that parents have the right to choose whether to vaccinate their child or not. Until a time when we can be certain that the vaccines are safe, this argument between us and the Healthcare Ministry will continue, said Elena Pavleska, who submitted the petition signed by 130 parents.
The Ministry recently revealed that 15.000 children are unvaccinated for measles, in a dramatic show of erosion of public trust. Parents are mostly avoiding the first vaccine and wait for their children to develop, learn to walk and talk, before vaccinating them.

Public trust was eroded by the Ministry itself.
Healthcare Minister Venko Filipce inserted himself in the September 2018 referendum on the name change when he commissioned billboards declaring that if the public supports the name change, Macedonia would eventually be rewarded with EU membership, which will result in safer vaccines. The billboards backfired when the obvious question was asked by the public – whether the message means that vaccines in use now were unsafe.

Filipce did not stop there. During a fake measles epidemic in the Macedonian capital (announced to justify multimillion dollar purchase), as he insistently called on parents to vaccinate their children, a batch of expired MMR vaccines was procured with drastic price cuts. The Ministry’s explanation was that it was a “labeling glitch”. 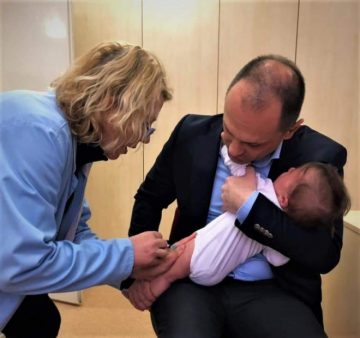 Fake vaccination
And finally, Filipce posted a picture of himself with his little niece in his hands, and a nurse administering what he claimed is the MMR vaccine. Meant to assure the public, the image did far more damage when people noticed that the child is way too young to receive the vaccine, and the protective cap is still on the needle. Pressed by the public, Filipce finally admitted that the whole thing was staged and the little girl was not vaccinated.