Hundreds of armed police officers were placed in front of the homes of MPs from SDSM who voted yesterday for the unconstitutional law on bilingualism, according to information from the field. 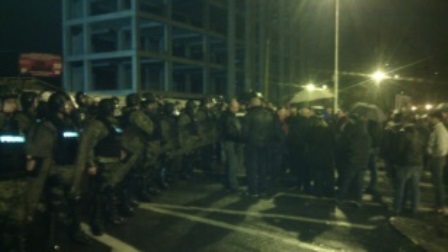 Media tried to contact the MoI spokesman, Toni Angelovski, but he refused telephone calls all night.

At the same time, lawmaker Ferid Muhic said that together with other treasonous colleagues from SDSM have agreed to hide home today and avoid any interaction with the public.

– We agreed to sit at home with colleagues. I will not ask for protection, it is too dramatic for me to talk and talk about this. Worst is that there may be serious elements that need to be considered. I had no protection last night, but we agreed not to move very much in public, so we do not irritate anyone, Muhic said.

The Macedonian public is furious with the Government’s complete and continuous disregard for all laws in the country and are asking for their heads. Thousands of angry messages have been sent across the social networks by citizens who are constantly expressing their dissatisfaction with the illegal law and the illegal fashion in which this law was passed.

Last night there was a minor incident when someone burned the car of a SDSM traitor from Vinica who voted for the law, and at the same time, the Interior Ministry informs that there were several attacks from dissatisfied citizens on party officials.

According to security experts, such a tense atmosphere, which is raised with a reinforced police presence, is also a way to defocus the public from the criminal way in which the law was passed, and the harmful nature of the law itself.