US President Donald Trump has decided to ground all Boeing 737 Max airplanes, citing safety concerns after the fatal crash in Ethiopia. The US was among the last holdovers in grounding the controversial jet.

“The safety of the American people and all people is our paramount concern,” Trump said Wednesday at the White House, announcing the measure. The order applies to all Max 8 and Max 9 versions of the popular airliner.

“We are supporting this proactive step out of an abundance of caution,” Boeing said following Trump’s announcement. The company’s shares reacted by tumbling almost 10 points, or 2.5 percent. 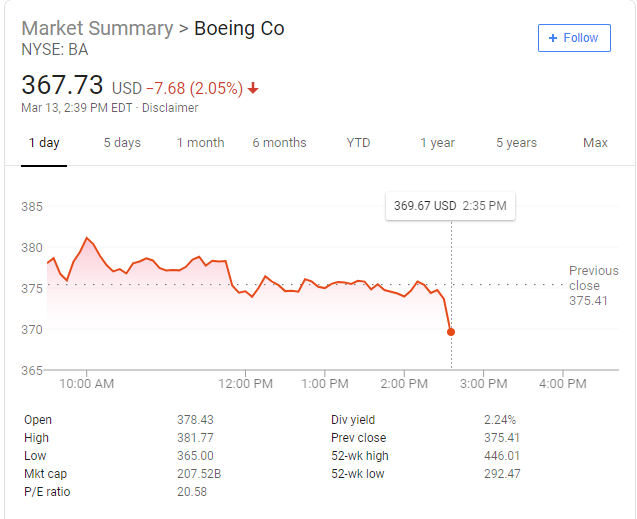 Trump praised the airline manufacturer as a “great company” and said he hoped that Boeing will come up “very quickly”with answers to what caused the crash in Ethiopia, but “until they do the planes are grounded.”

The Federal Aviation Administration (FAA) is expected to make a formal announcement, with possibly additional details about the Ethiopia crash and the length of the suspension.

Earlier in the day, Canada banned the 737 Max jets from operating in its airspace, leaving the US as the sole holdout. China led the way in grounding the jets in the wake of the Ethiopian Airlines crash, with the EU following suit, followed by a number of airlines across the world. By Wednesday morning, only the US and Canada were still allowing the 737 Max models to fly.

The White House’s reluctance to ground the jets was understandable, given that Boeing is one of the largest passenger jet manufacturers in the world and a major military contractor. However, it appears the risk of another fatal crash overrode financial and political concerns.