American tanks are floating down the Rhine once again, en route to Eastern Europe as part of ‘Atlantic Resolve,’ a NATO push to force Russia into submission. Moscow shows no signs of being worried, however. 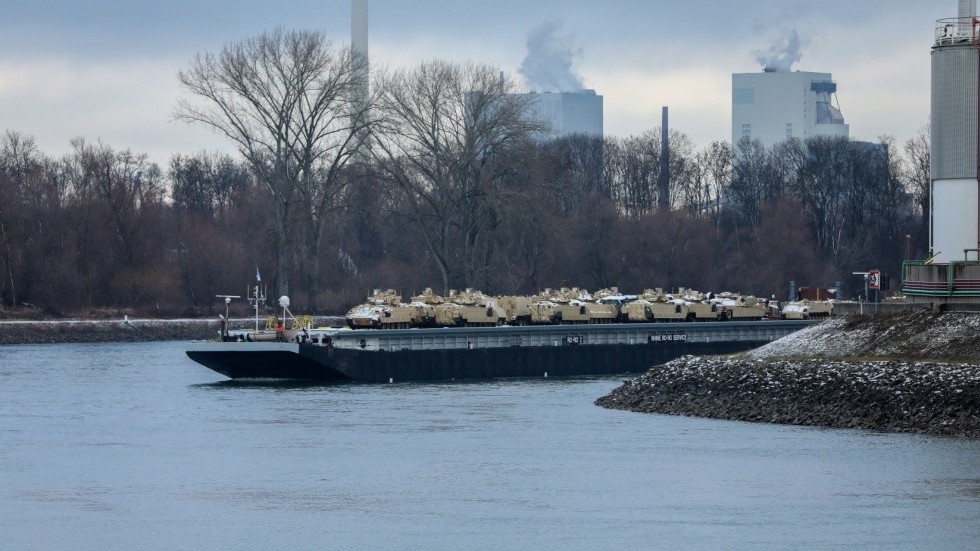 On Tuesday, the German tabloid BILD shared a photo of US tanks sailing past the famous Cologne Cathedral. The M1A1 Abrams tanks were stacked on a river barge, still in their desert camouflage paint, reportedly on the way to bases in Bulgaria, Hungary, Poland and Romania.

The Cologne Cathedral was the site of a famous tank duel in March 1945, when a German Panther tank knocked out a US Sherman, before getting destroyed by a Pershing heavy tank that happened to be in the area.

Some 3,500 US soldiers, 80 tanks and 500 tracked vehicles arrived in Belgium last month, as part of the ‘Atlantic Resolve’ push. After delays due to inclement weather, the troops and vehicles have started moving east by barge, road and rail.

The tanks belong to the 1st US Cavalry Division, an armor unit based out of Fort Hood, Texas. The 1st US Infantry Division (Big Red One) from Fort Riley, Kansas is also being deployed in Eastern Europe.

“The deployment of ready, combat-credible US forces to Europe in support of Atlantic Resolve is evidence of the strong and unremitting US commitment to NATO and Europe,” according to official Pentagon materials.

These efforts to show force in Eastern Europe began in April 2015, ostensibly to “deter Russia” after NATO accused Moscow of “invading” Ukraine. In addition to the US troop presence in former Warsaw Pact countries, there is a rotating NATO force of several thousand in Estonia, Latvia and Lithuania.

Russia appears unconcerned by the saber-rattling based on fantasies of impending invasion. In August 2018, President Vladimir Putin famously dismissed NATO concerns about Russian military drills by pointing out they are all defensive and inside Russia, while NATO keeps pushing its forces up to the Russian border.

Moscow organized joint wargames with Belarus in 2017 that had NATO countries jumping at shadows, and last year held massive military drills in the Far East, with Chinese participation.

Another part of Washington’s push to bolster NATO has been the “Strong Europe Tank Challenge” competition, introduced in 2016. US tankers have yet to win that one, however. Germany dominated in 2016 and 2018, losing to Austria in 2017 – when the US placed third. American tankers had their worst result last year, placing below everyone but Ukraine.

Zaev caught lying for the 2578th time: “Yes, we paved your street”

Marija Nikolovska - September 4, 2019
Load more
© MINA 2018
Do NOT follow this link or you will be banned from the site!