The first full-size passenger capsule designed to carry passengers at over 1,100 kilometers per hour (700mph) was unveiled on Tuesday in Cadiz, Spain. 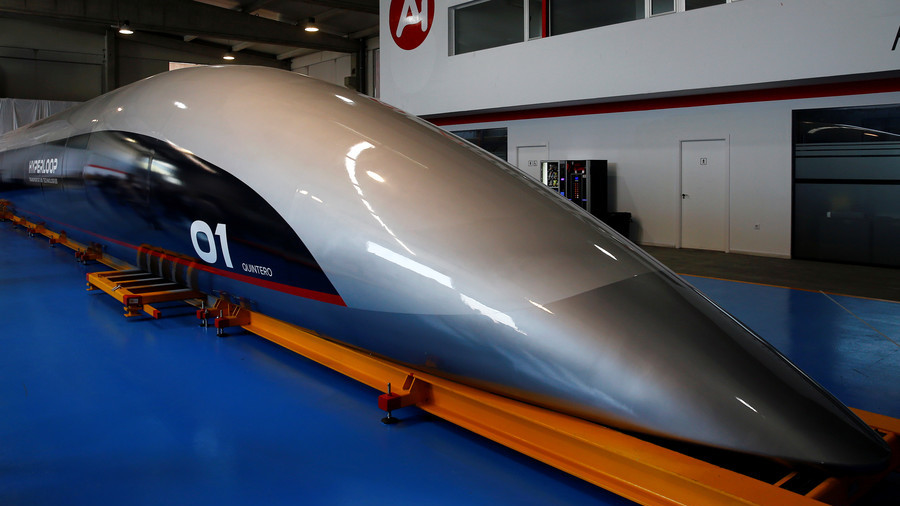 According to Hyperloop Transportation Technologies (HTT), the vessel has been built to scale to transport passengers at super-fast speeds through magnetic tubes.

“Today we have unveiled a new type of transportation vessel built with an industry high percentage of composite, which makes the Hyperloop capsule perhaps the safest transportation vehicle in the world,” said Rafael Contreras, the company’s co-founder and chairman.

HTT CEO Dirk Ahlborn expressed hope that a full hyperloop system would be up and running in three years. “In three years, you and me, we can take a Hyperloop,” he told CNBC.

Ahlborn said that the capsule will be a part of “one of the most efficient transportation systems ever made.”

Named ‘Quintro One,’ the Hyperloop pod is made out of dual-layer smart composite material designed to be extra resilient, and weighs five tons. At a length of 32 meters (105 feet), it will form part of a longer train that could feasibly speed cross-country in record times. A journey from Los Angeles to Las Vegas could take just 20 minutes.

Once the final touches are completed, the capsule will fit between 28 and 40 passengers, and will be tested on a Hyperloop test track.

“In 2019, this capsule will be fully optimized and ready for passengers,” confirmed Bibop Gresta, chairman and co-founder of HTT.

The Hyperloop technology uses magnets to levitate and propels pods through large tubes at speeds of more than 700mph. Tesla CEO Elon Musk claims he came up with the idea in 2013.

Worldwide adoption of Hyperloop transport is expected to begin in “maybe five to 10 [years],” according to HTT.

No Parliament, No Elections… Macedonia continues to be run by nutjobs